Tsarina Alexandra Feodorovna offers profound words of wisdom on the twin subjects of Christian marriage and family life. Her reflections and counsel are all the more necessary in these times, for they call all Christian husbands and wives, mothers and fathers to embrace the true vocations of matrimony, marked by a shared life of selflessness and loving sacrifice. 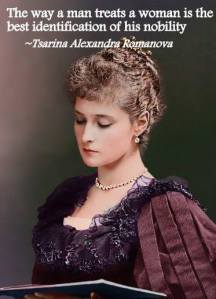 True enough, this is Russian and Orthodox in focus, not British or Anglican! But that does not mean the wisdom and guidance provided by the last Tsarina is not just as worth heeding by good Christian folk of other churches, communions, and jurisdictions. Besides, Anglicans have traditionally had very good relations with Orthodox Christians, since both look to the Fathers and Doctors of the ancient and undivided Church of the first millennium.

And Christian marriage is under threat from many directions, in today’s highly secular culture: it does not hurt us at all to recall — and hopefully, model our own relationships after — the traditional, ideal form of holy matrimony, expressed so clearly and beautifully by Empress Alexandra, and described by my friend Ryan Hunter.