Source: 10 of the Best Medieval Abbeys in Britain

While I may owe a certain debt, as an Anglican, to King Henry VIII, I can never completely forgive or forget his Dissolution of the Monasteries. That said, they remain if anything even more spiritually evocative in their ruined grandeur than they might if they were still active foundations!

Okay, I am starting to feel better about the prospect of Charles becoming King when — may the day be long delayed! — Her Majesty enters into her eternal reward.

“Prince Charles is his own kind of conservative: an ecological preservationist, an arch-traditionalist, and a tiller and keeper of the soil, rather than a devotee of capitalistic creative destruction… Prince Charles’ conservatism is characterized by “trusteeship,” rather than the more modern concept of ownership. The latter assumes that the possessor of a property is entitled to extract all its market value, even if it destroys the use of that property and its goods for all posterity. Charles, ever a royal, allies himself to posterity’s interests…”

“‘On a moral and spiritual level, Charles believes that civilization isn’t sustainable unless humanity finds a way to live in balance with nature. For him, climate change is the ultimate judgment on a civilization that has rejected limits and fetishized economic growth and material prosperity over spiritual values.’ [The American Conservative]”

Proof positive, as if any were needed, that traditional / conservative values and sensibilities are by no means incompatible with — still less opposed to — a robust concern for this good earth on which we live, and on which we are utterly dependent for our continued survival and well-being.

A few more quotes from the article cited:

“The monarchy’s sympathizers might say that it is precisely because Charles’ position is partly insulated from corporate interests and moral fads that he is able to take a longer view of issues related to England’s countryside, its architectural patrimony, its historical sites, and the environment.

“Far from revealing an overweening royal authority or a disconnected left-wing scion, Charles’ letters show a gentle, far-seeing, if unfashionable monarch. In a sense, Charles quietly exercises the highest role a monarch can play in the modern administrative state. He is an insistent voice for tradition’s value to posterity, and an advocate for the men (and fish) that the market, or the bureaucratic state, would overlook and destroy.”

Today is Trinity Sunday, celebrating one of the key doctrines (the other being the Incarnation) of the Christian faith! This page discusses the matter in some detail:

May God the Father, God the Son, and God the Holy Spirit bless and keep each and every person who visits here!

More on the wonders — which may have been, if this convincing account is in fact accurate — accomplished by our “primitive” ancestors, known as the Celts… and if some other recent accounts are accurate, there was a great deal more continuity between the Celts and their pre-Celtic and proto-Celtic forebears than has until recently been recognized by scholars!

Some have even argued that the conventional understanding of Celtic migration across Europe may need to be reversed; that what we now know as the “Celtic” peoples of the Halstatt and La Tene cultures in fact arose along the Atlantic coast, evolving out of the Neolithic, Chalcolithic, and Bronze Age peoples of the West, and crossed Europe heading East.

In any case, this reminds me of some of the lines from Robin Williamson’s magisterial “Five Denials on Merlin’s Grave,” a long prose poem set to music which recounts the mythic history of the British Isles:

“… but let us sing the skill of the master builders
long ago
for it was no peasantry clodding after scrawny cows
who raised the hollow hills and henge stones
but calm and cunning wizards worked these wonders
continuing the snail line, dod flat at ring stand
ruling scribing and pegging out in granite
the windings of the dragon track
that writhes unhewn
in sward and marsh and moss and meadowland
that twines in stellar gravity among the eaves of the cubic sky
serpent bird of Hy Brassail
force of spring
wing sunk
bound free
as we perceive our dream at centrifugal spin
so green leaves grow
the rowan bears the crown
so they, upon the veins of Anu, blazed the eye of Bel
to print a spell of glory in our blinks of lives
rightness of the world self seen
the green
the garden
and poetry attests their artistry thus and otherwise
older yet and wiser far
and I will not forget.”

Source: Throne, Altar, Liberty: Liberalism has not improved with age

“The liberals of the so-called Age of Enlightenment, made frequent accusations of tyranny against the medieval Church, the feudal aristocracy, and especially kings. They believed that these institutions had a tendency towards tyranny which their theories would check, thus providing for government that is more restrained and responsible.

“History, however, tells another story. Today, in the age of liberalism triumphant, there is scarcely an area of our everyday lives over which elected legislative assemblies and the armies of bureaucrats and regulators at their beck and call would hesitate to assert some degree of control. They may not always literally march into a man’s house and business and boss him around… but they have nevertheless made their government virtually omnipresent in a way that any feudal king would have rightly regarded as tyrannical.

“Indeed, in virtually every way the size of government can be measured, from the number of ministries and civil workers to the extent of the government expenditure and how much it takes out of everyone’s pockets in taxes, government is very much larger now, than before liberalism got its hands on it. As High Tory journalist Sir Peregrine Worsthorne put it about ten years ago “with remarkable rapidity, from being a doctrine designed to take government off the backs of the people, liberalism has become a doctrine designed to put it back again.”

“Her Majesty The Queen officially opened a new session of Parliament this morning, but chose to take the lift instead of the stairs, another small sign her age is starting to affect her work.” I think Her Majesty and Prince-Consort Philip can be forgiven that minor concession, considering that she is 90 and he 94! Includes a video of the Queen’s Speech and much of the ceremony, and links to further information on this event.

One of the traditions of the State Opening – the Ceremonial Search by the Beefeaters (Yeoman Guard) for threats to The Queen’s safety and welfare, before her arrival.

HM The Queen and Prince Philip, Duke of Edinburgh, leave Buckingham Palace by State Coach – the traditional horse-drawn carriage – en route to the Houses of Parliament.

HM The Queen and Prince Philip, Duke of Edinburgh, proceed through the Royal Gallery of the Houses of Parliament en route to the State Opening of Parliament.

Her Majesty Queen Elizabeth II wearing the Imperial State Crown and Robe of State, attended by pages and escorted by His Royal Highness, Prince Philip, Duke of Edinburgh. 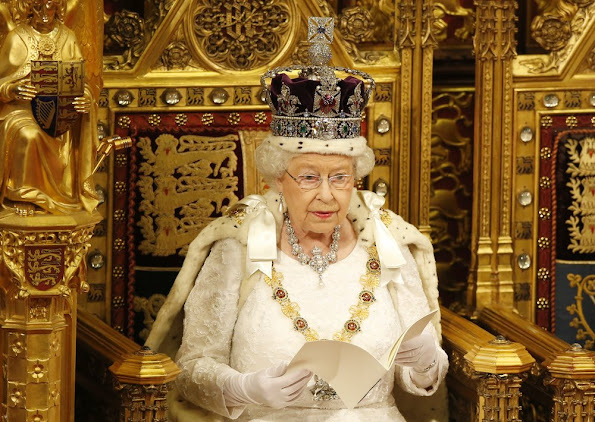 Her Majesty Queen Elizabeth II reads The Queen’s Speech from the Throne during the State Opening of Parliament. It is not often that one sees Her Majesty in full Royal panoply! Still less is able to appreciate the incredible beauty and ornateness of her Throne in the House of Lords, where the Queen’s Speech is given.

BRITAIN could have a “truly exciting future” by quitting the EU and rebuilding trade links with the Commonwealth, a senior New Zealand politician has said.

“This is a question for the British people alone,” [Winston Peters, a former deputy prime minister, finance minister, and foreign minister of New Zealand] conceded. However, he went on, “Britain taking a bold and courageous step back to the Commonwealth, with a fresh approach, is something the Commonwealth would respond positively to. It would signal the dawn of a new age of Commonwealth economic advancement.”