For their refusal to surrender fact to immature and insecure emotion, the museum, along with the battlefield will be subjected to militant anti-history protests planned by Antifa groups on the anniversary of the Battle of Gettysburg. These Antifa groups plan to burn Confederate battle flags and desecrate graves.

And kudos to the Gettysburg Museum of History for refusing to give in to the dictates of political correctness, of which “Antifa” is the logical (if that word even applies) outcome: 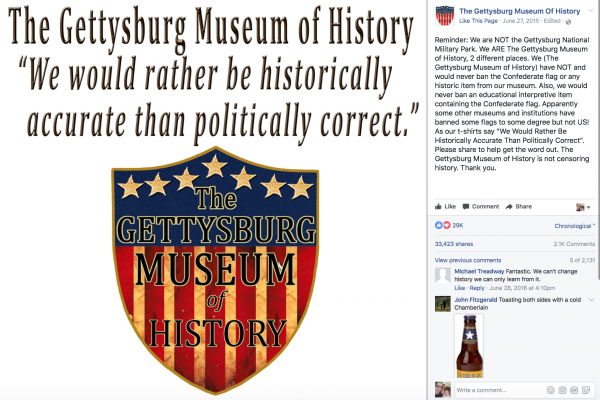 Would that more people and institutions applied similar high standards!

“Antifa” supposedly stands for “Anti-Fascist.” Yet they are not only fascistic themselves – if by that is meant violent and totalitarian – but in some ways at least, worse than fascists: fascists, whatever their other faults, at least loved their own people. These barely-human scum hate their own people, and their own heritage. They seem to think that destruction of history and desecration of the memorials – including, reportedly, grave-sites – to men who were more courageous than the likes of these scoundrels can even imagine is somehow an acceptable way to demonstrate that “Love Trumps Hate.”

Of course, slogans like that are just for show. Their real motives and goals are far more sinister and far-reaching, and history – at Gettysburg or elsewhere – is not all they want to destroy. This is part and parcel of the larger assault on Western civilization itself (as recounted in numerous posts on this blog and far more numerous accounts elsewhere), and the creation of a “brave new world” of their own ideological design, out of the rubble. And history is a goal for the destroyers because a rootless people, a people severed from a strong and sympathetic sense of their own past, is a people weakened and vulnerable to ideological assaults.

Slime-buckets like “Antifa” claim to be part of a “resistance” against the policies (and person) of the current US President. But whatever one’s thoughts on President Trump, it is ruffians like this that truly need to be resisted. As the inscription graven in stone above the National Archives so accurately puts it, “What is past, is prologue.” Those who seek to destroy the past are undermining both present and future.