“I recently dug up a 1908 curriculum manual in the Minnesota Historical Society archives. It provided instructions on everything from teacher deportment to recommended literature lists for various grades…”

Writer and educator Annie Holmquist compares 7th & 8th grade readings lists for 1908 Minnesota with one from 2016. What she found may not surprise many readers of this blog, but it may sadden us: the idea that the curriculum has been “dumbed down” over the last century appears to be all too true.

Noting the disparity in age of the literary works on the 1908 list compared to the 2016 one, she points out,

“Older is not necessarily better, but the books on the first list suggest that schools of the past were more likely to give their students time-tested, classic literature, rather than books whose popularity may happen to be a passing fad…

[Nota Bene: C.S. Lewis had some good things to say on the subject of reading old books.]

She then goes on to add,

“A second striking difference between the two book lists are the themes they explore. The first is full of historical references and settings which stretch from ancient Greece (Tanglewood Tales) to the Middle Ages (Harold, Last of the Saxon Kings) to the founding of America (Courtship of Miles Standish). Through highly recognized authors such as Longfellow, Stevenson, Kipling, and Dickens, these titles introduce children to a vast array of themes crucial to understanding the foundations upon which America and western civilization were built.”

I would like to highlight her statement, quoted above, that the books on the 1908 reading list “introduce children to a vast array of themes crucial to understanding the foundations upon which America and western civilization were built,” because that is a big piece of what we have lost over the last hundred years, in my opinion.

Education nowadays seems to have as one of its core values the elevation of the wonders of multiculturalism… and a subsequent, and consequent, devaluation of “the foundations upon which America and western civilization were built.” Is it any wonder that our children are graduating from grade school, and later college or university, with little knowledge and less appreciation for America, and Western civilization?

And it it any wonder that the foundations, left thus untended, or even undermined, are becoming more than a little shaky?

Moving along: to be honest, she is a bit too generous in many aspects of her assessment of the contemporary list for my tastes. But you can read that on your own, and make your own judgements. However she is square on the money, I think, when she writes,

Unless we give our students challenging material to dissect, process, and study, how can we expect them to break out of the current poor proficiency ratings and advance beyond a basic reading level?

Or as they say in computer lingo, “garbage in, garbage out.” That is not to say that everything our children are being taught today, literature-wise or otherwise, is garbage. But the percentage of low-quality selections is too high. As in so many other areas of life, the concern is more for making sure that students are exposed to works that are contemporary and multicultural, rather than time-tested and substantive.

Anyone who is paying attention cannot help but notice an overall decrease in literacy and erudition over the past century. But what really brought it home to me was the opportunity I had, some years ago now, to pore over a stack (actually a shelf) of old yearbooks at my alma mater, the former Western Maryland College (now “McDaniel College”), that went back at least to 1912, that I recall.

Some years were missing, and I didn’t have time to skim through them all, but the decline (dare I say, degeneration?) was clear to see – and particularly in the years following World War Two. The early ones were indeed erudite! And that at a level one would never even think to expect of a yearbook, nowadays. Articulate, polished, witty, and replete with plays on words and classical references, they were an embodiment of what college education used to stand for, back in the days of its glory.

There hadn’t been too much slippage by my mother’s time there (she graduated in 1949), but they still weren’t quite up to the standard set by those earlier volumes. By the time of my brother’s college years (he graduated in 1975) the rot was well on – the references weren’t to classical heroes and classical philosophy, but to football, beer, and girls.

And by my time – I entered in 1983, left in 1985, and returned to finish up from 1989-91 – it was about what you’d expect: the “Animal House” approach to the college experience (with a side of incipient political correctness, even at the beginning, and especially during my second tour there). I don’t know what they’d be like now, and I’d almost prefer not to imagine…

But of course, college doesn’t happen in a vacuum. The seeds are sown at home, naturally, but the sprouts are tended and watered (or not) in grade school. If the early school curriculum is dumbed down, it’s no wonder that colleges and universities must spend so much time remediating that lack, to even get students up to where they can function at the “college level” – and why so many seem to have given up on academics and what used to be called “higher education,” being content to function as glorified (and expensive) trade schools.

It’s really quite sad, and one of the many factors (whether symptom or cause being one of those chicken-and-egg questions that may not be wholly answerable) in our overall cultural and societal decline. If there are two institutions which have done the most to preserve, foster, and transmit Western culture and civilization over the last millennium, they are the Church and the University. If both are failing, as it appears they are – whither the West?

This came across my newsfeed today: 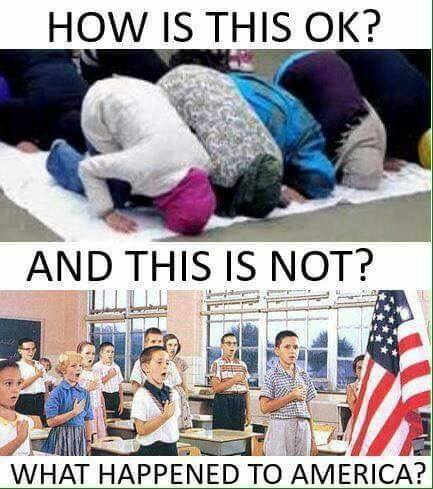 It is a good question – one to which I have at least a partial answer.

What happened is that we are dealing with a decades-long (centuries-long, if you trace its origins back to the Enlightenment) dominion of Jacobins – or as some call them, cultural Marxists. Anti-Christianity, anti-family, and anti-tradition are their stock in trade. Islam is their battering-ram to break down what bastions of tradition still remain.

But Islam is an un-trusty weapon that can turn in the hand, and an ironic choice for people who are radically secularist and opposed to tradition. They appear to think they can control it, but they have about as much chance of that as Gollum did of controlling the One Ring of Sauron. They do not realize – or perhaps prefer not to admit, even to themselves – that they’d be among the first to be beheaded, if Islam ever did take control in the West.

Then we have the horde of otherwise well-meaning people who are not – quite! – Jacobins, but who have made an idol of “multiculturalism.” That means that Islam is not only okay, but admirable because it is a “non-Western” culture, while anything that smacks of tending to support, promote, and preserve the solidity, cohesion, and tradition of Western culture is at least suspect, if not anathema.

I pray the pendulum may swing back, before it is too late! There are signs that it is swinging. But will it be in time? Only God knows. Thankfully, He is in charge of history, and ultimately, His will shall be done. But that’s ultimately. His time is not our time: let us not forget that the Reconquista of the Iberian Peninsula took 700 years!

I hope and pray we are given the sense and the determination to defend the culture, history, and heritage of Western civilization, a.k.a. Western Christendom, so that our descendants do not need to spend the next seven centuries, or more, trying to get it back. 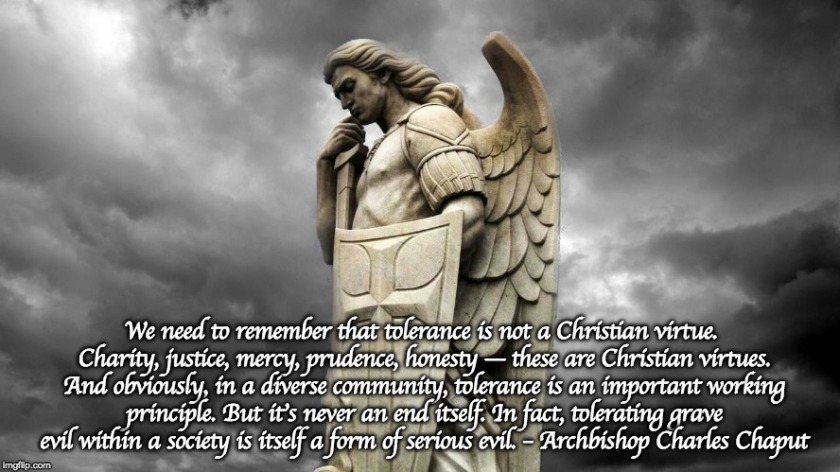 “We need to remember that tolerance is not a Christian virtue. Charity, justice, mercy, prudence, honesty — these are Christian virtues. And obviously, in a diverse community, tolerance is an important working principle. But it’s never an end itself. In fact, tolerating grave evil within a society is itself a form of serious evil. Likewise, democratic pluralism does not mean that Catholics should be quiet in public about serious moral issues because of some misguided sense of good manners. A healthy democracy requires vigorous moral debate to survive. Real pluralism demands that people of strong beliefs will advance their convictions in the public square — peacefully, legally and respectfully, but energetically and without embarrassment. Anything less is bad citizenship and a form of theft from the public conversation.”

What the Archbishop says about (Roman) Catholics applies to all other Christians, as well.