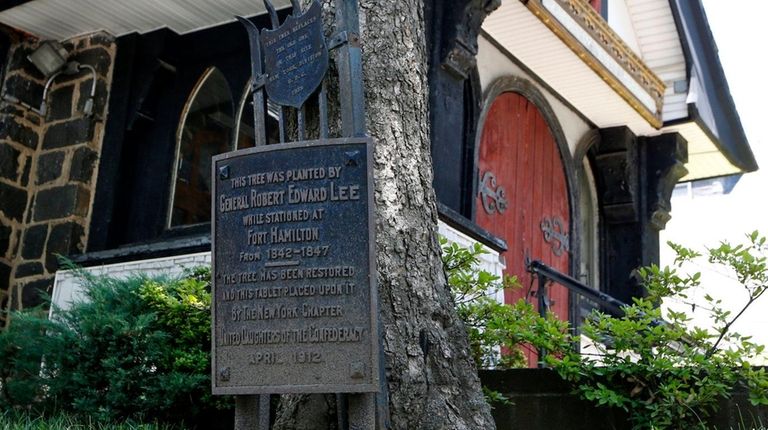 Two plaques honoring Confederate Gen. Robert E. Lee that mark a maple tree outside a Brooklyn church will be removed Wednesday, the spiritual leader of the Episcopal Diocese of Long Island said Tuesday.

Sadly, the Episcopal Church is showing its recurrent idiocy and lack of both historical perspective and breadth of vision once again. The attacks on General Lee, of which this is but the latest of many, are particularly unjust and absurd, given the actual and expressed beliefs of the man himself.

Here, for a more balanced view, are a few excerpts from an essay entitled “The Real Robert E. Lee,” from the website of the Abbeville Institute’s “Review”:

• “First, Lee deplored slavery, describing it as a ‘moral and political evil’ in a letter to his wife, Mary Anna. Lee told her that they should give ‘the final abolition of human slavery…the aid of our prayers and all justifiable means in our power,’ praying for ‘the mild and melting influence of Christianity’ over ‘the storm and tempest of fiery controversy’ driving America to disunion. Lee elsewhere called slavery a ‘national sin’ for which he feared America would be punished.”

• “Second, Lee initially opposed secession, but his loyalty to his native state – the Commonwealth of Virginia – surpassed his loyalty to the abstraction of the Union…. Although Lee considered secession to be wrongful, he could not countenance a government based on force of arms rather than consent of the governed.”

• “Third, Lee did not believe he was fighting for the particular issue of slavery, but for the foundational principles of American freedom – self-government, independence, and the constitutional rights of the states. As the Confederacy rejected three offers from Lincoln to exchange submission to the Union for the protection of slavery, Lee’s convictions were confirmed. ‘Our sole object,’ Lee wrote to Confederate President Jefferson Davis, ‘is the establishment of our independence and the attainment of an honorable peace.'”

“Before his very first battle at Cheat Mountain, Lee did not encourage his men to fight for slavery, but for home, hearth, kith, and kin. ‘The eyes of the country are upon you. The safety of your homes and the lives of all you hold dear depend upon your courage and exertions. Let each man resolve to be victorious, and that the right of self-government, liberty, and peace shall find in him a defender.’

“Lee supported states’ rights not because they protected slavery, but because, as the Founding Fathers understood, they were the ‘safeguard to the continuance of a free government’ and ‘the chief source of stability to our political system.’ As Lee explained to Acton, ‘The consolidation of the states into one vast republic, sure to be aggressive abroad and despotic at home, will be the certain precursor of that ruin which has overwhelmed all those that have preceded it.’

“Lee further noted that George Washington and Thomas Jefferson, both of whom were secessionists in their day, opposed ‘centralization of power’ as the gateway to ‘despotism.’ According to Lee, ‘The South has contended only for the supremacy of the Constitution, and the just administration of the laws made in pursuance to it.’”

This is a man who should be honoured, and whose thoughts, expressed in his writings, should be taught to generations of school-children! As President (and former 5-star General and Supreme Commander of Allied Forces in Europe during WW II) Dwight D. Eisenhower put it, in a letter to a correspondent questioning Eisenhower’s admiration for General Lee,

“General Robert E. Lee was, in my estimation, one of the supremely gifted men produced by our Nation. He believed unswervingly in the Constitutional validity of his cause which until 1865 was still an arguable question in America; he was a poised and inspiring leader, true to the high trust reposed in him by millions of his fellow citizens; he was thoughtful yet demanding of his officers and men, forbearing with captured enemies but ingenious, unrelenting and personally courageous in battle, and never disheartened by a reverse or obstacle. Through all his many trials, he remained selfless almost to a fault and unfailing in his faith in God. Taken altogether, he was noble as a leader and as a man, and unsullied as I read the pages of our history.

“From deep conviction, I simply say this: a nation of men of Lee’s calibre would be unconquerable in spirit and soul. Indeed, to the degree that present-day American youth will strive to emulate his rare qualities, including his devotion to this land as revealed in his painstaking efforts to help heal the Nation’s wounds once the bitter struggle was over, we, in our own time of danger in a divided world, will be strengthened and our love of freedom sustained.”

Nor was Eisenhower alone in his esteem for Lee. As the Abbeville article recounts, President Theodore Roosevelt – one of the more famous American progressives, albeit one who has also been attacked, in recent times – described Lee as “the very greatest of all the great captains that the English-speaking peoples have brought forth.” Prime Minister Winston Churchill referred to Lee as “the noblest American who had ever lived and one of the greatest commanders known to the annals of war.” And according to another staunchly progressive / liberal President, Franklin D. Roosevelt, “We recognize Robert E. Lee as one of our greatest American Christians and one of our greatest American gentlemen.”

Lee was not perfect, of course; there has been precisely one perfect Man, and he was born in Bethlehem and died on the Cross on Calvary. But that makes it all the more sad that, instead of using the present controversy as a “teachable moment” to show forth the truth that in God’s Providence, great men can be flawed and flawed men can be great, the Episcopal Church has chosen instead to kowtow to – nay, to embrace – willful historic ignorance, presentism (see also this), and political correctness.

We are all, present and future generations, impoverished by such choices.

One thought on “Bishop: Tree plaques in Brooklyn honoring Gen. Lee to be removed | Newsday”