On this day, almost at this hour – at the “eleventh hour, of the eleventh day, of the eleventh month” – the guns of the Western Front fell silent at last, and four years of a cruel, horrific, European brother-killing war, the “Great War,” World War One, the “war to end all wars” (if only!) came to an end.

Bled nearly dry by four years of meat-grinder warfare, a whole generation nearly annihilated, Europe was exhausted. But the arrival of more than a million fresh, able, and (for the most part) well-equipped American troops turned the tide. Now hopelessly outnumbered, its cities falling to Marxist revolution and even parts of its once-proud military in mutiny, Germany had no choice but to sue for peace. 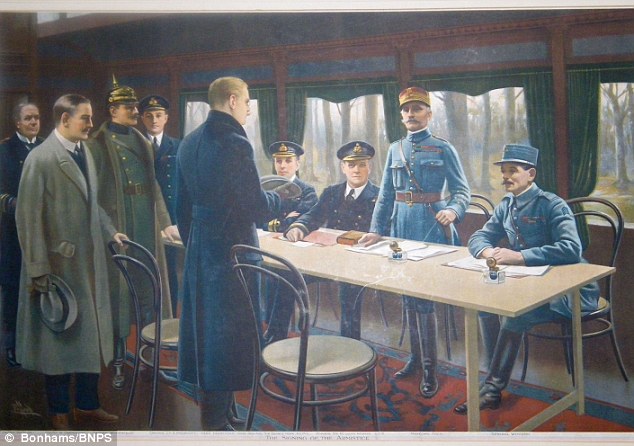 The Kaiser abdicated and fled the country, a draconian, viciously punitive peace was signed at Versaille by German representatives who had no choice, and the war was over… and the stage set for the rise of Nazism, and the break-out of World War Two. Germany was very far from being uniquely or solely responsible for the start of the Great (in the sense of “massive,” not in the sense of something desirable) War, but they were treated as the culprits and punished to a degree which made the advent of Hitler and the Nazis basically inevitable.

The punitive reprisals of the Versailles treaty not only contributed directly to the rise of the National Socialists and the “Great War Pt. 2,” World War Two, but the decisions and actions undertaken in the aftermath of WW I have contributed materially to every war that has happened since, from the Cold War to the rise of militant Islam – and of course, the horrific loss of an entire generation of men would prove to be a major factor in what became the demographic collapse of Europe.

But hindsight is 20/20: that was all in the future, in 1918. The overwhelming feeling was relief, that the punishing war was finally over.

Today, then, we commemorate the 100th anniversary – the Centenary, as it is called – of the Armistice that ended World War One. Today is Armistice Day (Remembrance Day); today is also, somewhat unusually, Remembrance Sunday, as it is only occasionally that the two fall on the same date. In the U.S., where we have our own Memorial Day in the Spring, it has become expanded to Veterans Day, honouring all U.S. veterans, living or dead. It is also Martinmas, the Feast of St. Martin of Tours, in the Christian calendar… a fact which may not be irrelevant to the choice of 11 November for the Armistice.

Just paused for the traditional two minutes of silence, at eleven o’clock.

Of much less importance – much less! – but of personal significance, today is also the one-year anniversary of my ordination to the priesthood. A significant day, in many respects. But a somber one, and especially this year. One hundred years ago, a war ended that had generated nearly 40 million casualties… and between 15 and 19 million dead.

Let us remember – and learn.