Videos paint a stark contrast between events in Paris and Rome, this past Saturday.

While not without the analysis (typically upbeat, which makes him a nice change from the gloom-and-doom prophecies which are all too understandably common in traditionalist and nationalist / populist circles) for which Dr. Turley is well-known, the most striking feature of this video linked above.

It is a comparison, via video clips taken on Saturday, December 8, 2018, between a nation which has chosen to celebrate its own people, history, and cultural heritage – Italy – and one which has chosen (or at least, its government has chosen for it) to sacrifice all of those on the altar of globalism: France.

But France is awakening, however belatedly and however grimly; I sincerely hope that great nation and people – the land of Charles Martel, Charlemagne, and Charles de Gaulle, among others – is able to shake off its chains before it’s too late! 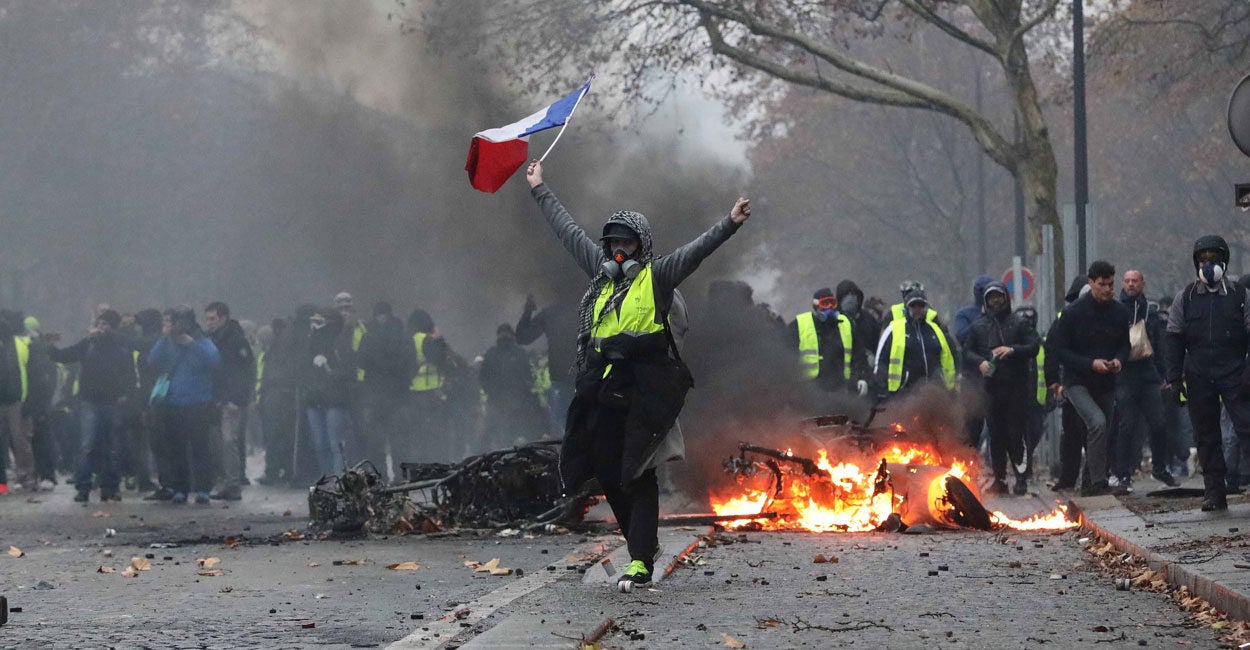 I have not posted much about the Gilets Jaunes (“Yellow Jackets” – thus my title – or “Yellow Vests”), the safety-vest-wearing protesters who have for several weeks been storming the streets of Paris, originally over a gas tax (“carbon tax”) imposed by the Macron government as part of the Left’s climate-change agenda (*). But with the protests not only continuing, but growing more intense, and spreading to other nations such as Belgium, Sweden, and even across the Atlantic to Canada, it’s time to revisit the phenomenon.

* That the climate is changing is obvious to any observer; but contrary to popular assertions, the idea that this is due primarily or exclusively to human action – “anthropocentric global warming,” or “AGW” – is far from “settled science.”

Leaving aside the fact that any science worthy of the name is never “settled,” there is a growing body of evidence that not only is human-generated carbon output a minor if not inconsequential player in the process, but the Sun – surprise, surprise! – is by far the primary driver of terrestrial climate, and that after a couple of warming centuries, we are about to enter a major cooling period, not unlike the “Maunder minimum” of 1645 to 1715 (the peak of the “Little Ice Age“).

But this is not widely publicized in the mainstream press, as the Left has found global warming / climate change a useful tool for their centralizing (and fear-mongering, as an enabler of that centralizing) agenda.

But while the carbon tax appears to have been the precipitating issue, it seems to have been the proverbial straw that broke the camel’s back, because even after Macron backed down from the tax last week, the protests have continued and grow. A major driver, of course, is the economy. The social-welfare states of Europe may have looked like idyllic paradises to folks here in the U.S., but they have been paid for with exorbitantly high taxes, and increasingly the people of Europe have begun to question what they’re really getting for their money.

And the fact that many of the countries of Europe, under the influence of Merkel and Macron, have opened their doors to a massive influx of so-called “refugees” who are actually, in fact, economic migrants – and have often been more generous with benefits to them than to their own people – has unsurprisingly built a simmering resentment which now seems to be boiling over. What was once about a particular tax is now about much more. Here is one list of demands put forward by the Gilets Jaunes in France:

There is another, longer, list floating around; but I have not yet seen a translation, and my grade-school French is not up to the task. What we are seeing, at any rate, is a spike in what might be called “revolutionary fervor” that we have not seen in Europe in many a long year. If it is not addressed constructively by existing governments, we may even see the beginnings of actual revolution. I sincerely hope it does not come to that! But as our own late President, John F. Kennedy, put it, many years ago,

It is in any case encouraging, to those of us who have been deeply frustrated by watching the people of Europe stuck in a quagmire of masochistic self-abnegation, to see them finally beginning to awaken and to begin, at least, to shake off their chains. I hope and pray that Europeans are at last beginning to grow weary of the absurd notion that they – we! – alone are guilty of crimes against humanity, for which we must do eternal penance, up to and including cultural and demographic suicide.