Sankta Lucia – the Feast of St. Lucia (“Lucy”), whose name means “Light” – is an ancient tradition in Sweden and other Scandinavian countries (although the Christian figure of St. Lucia originated in Sicily, interestingly enough). Her feast-day falls on the 13th of December, which in the Old (Julian) Calendar, would have been the Winter Solstice.

Although she is a Christian saint, with a Christian story, “Sankta Lucia” can also be translated “Holy Light,” and the folksy, homey rituals surrounding St. Lucia’s Day – in which the girl or young woman chosen to portray St. Lucia for that year, wearing a crown of candles, brings gifts of steaming-hot coffee and sweet rolls to her family (or village), while her attendants sing traditional songs – is a beautiful and moving enactment of the rebirth of light in the midst of the darkest time of the year.

This video was created by the incomparable Jonna Jinton, who writes,

“Lucia is a tradition in Sweden where we bring light to the darkness. Since many years back I have always gone out in the middle of the Lucia night to light up hundreds of candles in the forest, with the intention to spread light into the world.

“Maybe you have seen my earlier lucia-films here on my YouTube. But this year was special. Just as the other lucia-nights I prepared to get out and light up my candles. But this night, the forest surprised me.

“This film is for all the world. For all of you wonderful people out there ♥ I hope to be able to spread some light into your hearts. Thank you for taking the time to watch it.”

Do yourself a favour, and watch this in full-screen… and allow yourself to get lost in it. Magical! 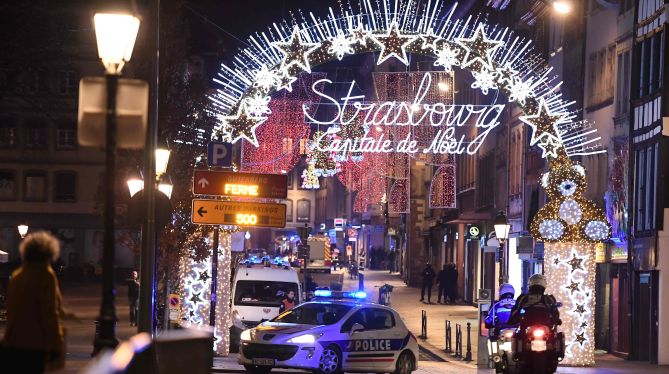 According to the BBC,

“French police have issued a call for help to find the man suspected of opening fire near a Christmas market in Strasbourg. Hundreds of police, soldiers and border agents on both sides of the Franco-German border are trying to find Chérif Chekatt, 29.

“Two people died and 13 were injured in the gun attack in the eastern French city on Tuesday evening. The gunman shouted ‘Allahu Akbar’ (‘God is greatest’) as he opened fire.

“Chérif Chekatt was already known to the French authorities as someone who had been radicalised into following an extreme form of Islam while in prison for crimes including robbery.”

Charles Martel, where are you…???