We are suffering from cultural dementia, muddied and dulled by the strokes of the modern. It is time, little by little, for recovery.

Typically excellent thoughts from the inestimable Anthony Esolen. Well worth a read! 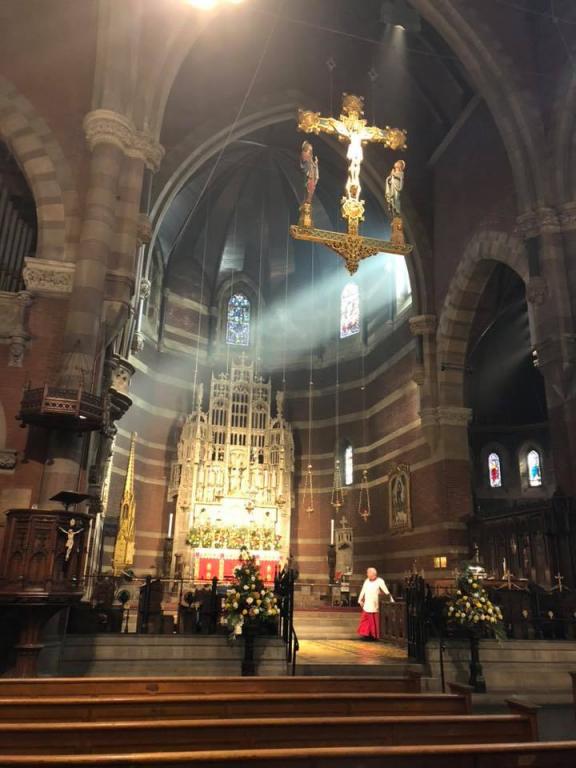 I fear we aren’t just guilty of domesticating the one true God, itself a grave error. In our petulant insistence on me-worship, we have shown where our ultimate allegiance lies. Scarier still is my suspicion that most of the church doesn’t even recognize what the hell we’ve done.

Source: Aslan Is Not a Tame Lion: The Serious Mistake of Casual Worship | Jonathan Aigner

In contrast to the pop-worship industry, Jonathan Aigner describes one example of what proper, traditional worship can look like, and why:

“Worship at Advent differs from common liturgical practice in the contemporary American church, to say the least. It is exceedingly beautiful, sublime even, evoking a sense of transcendence that seems strikingly out of place, even in one of the most historic cities in the country. Continuity and communion with the universal church is palpable.”

He goes on to quote The Church of the Advent’s Liturgical Customary:

“While the foregoing may seem excessively fussy, particularly in an age when manners are out of fashion and seminaries are apparently intent on turning the Mass into a rock-‘n’-roll show, remember that Divine Service is not a casual activity. The Lord’s Supper is a heavenly banquet, not a drive-thru lunch from a fast food shop. Lack of attention to deportment at Mass is as inappropriate as wearing torn jeans to a formal dinner. Sloppiness of appearance, movement or behavior will not show forth ‘the beauty of holiness and the holiness of beauty,’ which is what we seek to present.”

Now, there are times when a more casual (although still not sloppy, or careless) approach to worship may be appropriate. Summer camp comes to mind! Or outdoor services in general. But even in this more informal context, I believe, we still have to keep in mind the solemnity of what we are doing, and the majesty of the God we are serving.

In the words that used often to be found inscribed on the chancel arch or elsewhere in Episcopal churches of the more Anglo-Catholic persuasion (quoting Genesis 28:17),

“This is the very house of God, and this is the gate of Heaven.”

It’s time for us to boycott an industry that cares very much what the whole church thinks. We’re their only hope of staying afloat.

Jonathan Aigner often has good things to say, and this is no exception. As he accurately notes,

“It’s time to stop mimicking pop culture. It’s time for us to learn how to sing and make music again, instead of allowing others to do it for us. It’s time to rediscover the proper place of music in corporate worship. It’s time to end the Hillsongization, dethrone our jesusy American Idols, and once again foster creative beauty and artistry, especially in our children. It’s time to make worship about the work of the people once again, not just a good show and an hour of vegging out.”

Amen. Follow the link for five excellent reasons why the worship industry is leading Christians down the wrong path, and why boycotting it is not only a good idea, but may be essential for the faith – or at least, for the faith of Christians who have been caught up in it.

“I am a Classics Ph.D. who recently attended the 2019 Annual Meeting of the Society for Classical Studies (SCS—formerly the American Philological Association), a yearly conference that provides papers on classical subjects and interviews for academic positions. I now regret doing so since some remarks I made at the conference led to me being branded a ‘racist’ and the loss of my editing job with the Association of Ancient Historians.”

Source: How I was Kicked Out of the Society for Classical Studies Annual Meeting | Quillette

This essay is not easy reading. In fact, I found it both depressing and disillusioning (not that I had many illusions, to start with) and deeply angering. It is a classic example of the cultural Marxism prevalent in the academic world, and one of the reasons I did not choose to go on and obtain a PhD in Medieval History, as had been my original intention, since I saw the same trends developing in medieval studies, all the way back in the mid-’90s.

In this essay, Mary Frances Williams – note, this is a woman, not one of those dastardly males! – who describes herself as an independent scholar living in California, having received her doctorate from the University of Texas, Austin, recounts the way in which she was harassed, bullied, mischaracterized, and denied the right to have her voice heard in defense of Classics as a discipline… at a Classics conference (!), and purportedly, one devoted to the future of classics. Dr. Williams notes that

“Of all the academic disciplines, Classics alone has managed until now to withstand most of the corrupting influences of modern critical theory and ‘social justice’ activism. Ours is the last bastion of Western Civilization in the academy.”

Or at least, has been. END_OF_DOCUMENT_TOKEN_TO_BE_REPLACED