Holy smokes! I had not seen this one. A stellar performance! I can barely stay upright on roller skates, much less tap-dance in them. A tap dancer extraordinaire. One of the true greats!

I also like how nice everyone looks: my parents’ generation: people dressed better just to step out the door (and sometimes even at home) than a lot of folks do to go to church, nowadays. If they even go, that is… 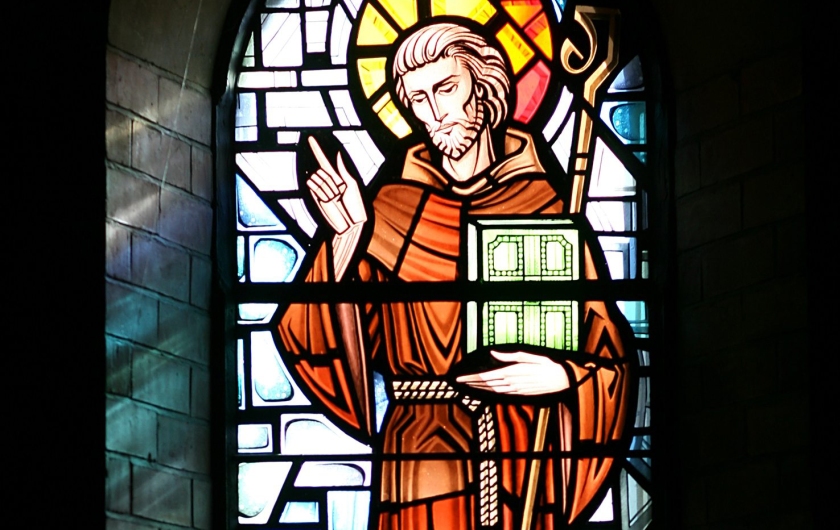 Columbanus (543–615) was an Irish monk, originally associated with the abbey at Bangor in modern-day County Down… Three practices from his rule that might benefit the modern church are mortification, simplicity, and moderation.

These are good and apt thoughts, and particularly so for Lent.

It is certainly the case that some of our popular ideas of what constitutes “Celtic Christianity” or “Celtic spirituality” are a bit off from the historic reality. Sometimes, far off. I learned that while studying ancient and medieval Irish history and archaeology at University College, Galway, in 1990! Celtic Christians were not (however appealing the image may be) 4th to 9th century hippies, flower-children or “freaks for Jesus” cruising through the early medieval period in the first-millennium equivalent of a VW Microbus.

However, that is how they’re often portrayed. The author aptly notes,

“a search at a popular online retailer reveals over 900 books for sale on the topic. However, most of these books do not engage with actual Celtic Christian writings or the archaeology of the early medieval period; instead, a few ‘facts’ are used to build an elaborate yet largely fanciful reconstruction of an alternative Christian spirituality. Most of these reconstructions portray the ancient Celtic Christians as creative, peaceful, nature-loving free spirits (the casual reader would be forgiven for assuming that the ancient Celts spent most of their time climbing trees and hugging animals).”

He goes on to observe that this “Celtic Christianity” is “then re-appropriated as a modern alternative for persons disillusioned with mainstream Christianity.” I confess, I have been guilty of a like desire, and even a like re-appropriation, myself, at various times in my own spiritual journey (even post-1990). The reality, however, is rather different: quite a bit more orthodox – and quite a bit more strenuous!

If there is one thing that is characteristic of Celts, it’s that they have historically tended to go at things full-tilt (visualize Iron Age Celtic warriors, their bodies blue with woad and their hair bleached and spiked with lime, howling as they charge naked into battle – or a millennium-and-a-half later, Scots Highlanders doing much the same thing, only in great-kilts).

The Celtic approach to Christianity was, in many ways, no different! “Go big or go home” could have been a Celtic maxim. But this tendency was not un-moderated by wisdom, common sense, or awareness of proportion, as the author likewise points out.

Sometimes their practices could seem, by our 21st-century lights, a bit “over the top.” But that does not mean we might not have things to learn from them. After discussing St. Columbanus’ strictness with respect to “mortification” (the elimination of sin and self-will from our lives – literally, “killing” these tendencies within us, or at least seeking to), he adds,

“This may strike the modern reader as harsh, and undoubtedly it is; I would not suggest that this strict asceticism should be adopted in modern life without hesitation or qualification. But in a world where ease and luxury have become virtues, we might do well to place ourselves in circumstances that stretch us, that break us out of our comfort zones, and that force us to do things we might not enjoy. A bit of mortification would not hurt any of us.”

Very true. Aristotle asserted that virtue is found in the “mean” between surfeit (excess) and deficit, and that is true both of pursuing our desires and mortifying them. And so one of the characteristics the author ascribes to the Celts is moderation:

“Celtic monasticism was harsher than most contemporary forms of spirituality. The monks were unrelentingly hard on sin, and they sought to weed out immorality as few people in the Christian tradition have. Yet, paradoxically, there was also a strong tendency toward moderation. Columbanus counsels his followers to always seek a middle path: ‘Thus between the little and the excessive there is a reasonable measure in the middle, which always calls us back from every excess on either side, and in every case provides what is needed and spurns the unreasonable demand of unnecessary desire’ (chapter 8).”

Columbanus’ was “a very nuanced view of the Christian life, and it often seems out of keeping with our age of sound bites and superficiality. Celtic spirituality contains a thoughtful moderation that can help us steer between the extremes our culture pulls us toward.”

Indeed, moderation does not seem to be much of a current virtue, at all! We are counseled on the one hand to frantically climb the corporate ladder, eschewing vacations to get ahead, and keeping our smart-phones constantly by our sides so that we may not miss an opportunity – and on the other to lose ourselves in electronic stimulation and hedonistic “pleasures of the flesh.” Celtic Christians, I feel sure, would have counseled us to cast a disapproving eye on both!

As the author concludes,

“In a culture that demands that we seek immediate gratification of our every impulse, the ancient Celtic Christians remind us of self-denial and mortification. In a world of excess, we might learn from their satisfaction with simplicity. In a culture of extremism, they counsel us to embrace moderation. The real Celtic Christians may not be as trendy as the pop-culture ones, but if we engage them on their own terms, we might be surprised at how relevant their faith remains for our modern world.”