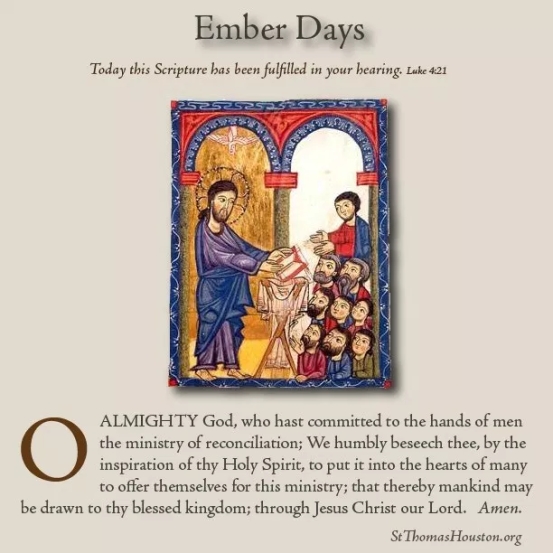 The Ember Days are four groups each of three days in the Church year that have been observed as days of fasting in the Churches of the West.

Source: Ember Days | For All the Saints

Today is Ember Saturday in Lent: the last day of Lenten Embertide, which runs from Wednesday through today (although Thursday is not not considered an Ember Day. But it’s a question worth asking: what are Ember Days, exactly, and what’s their significance? For All the Saints has a typically good and interesting treatment of these days, but here is some additional information on the subject:

Traditionally days of fasting and abstinence, in the Anglican tradition, they are generally considered days suitable for ordinations, and/or for praying for those called – or who may be called – to the exercise of various offices of ministry in the Church. The Book of Common Prayer (1928) Collect for the day, not to mention the choice of lectionary readings, makes this abundantly clear:

O ALMIGHTY God, who hast committed to the hands of men the ministry of reconciliation; We humbly beseech thee, by the inspiration of thy Holy Spirit, to put it into the hearts of many to offer themselves for this ministry; that thereby mankind may be drawn to thy blessed kingdom; through Jesus Christ our Lord. Amen.

The 1979 version used by the Episcopal Church – maligned by many traditional Anglicans, and not entirely without cause (if only it had been presented as a book of additional services, and not as “the” Book of Common Prayer, much grief might have been avoided… but this is not the place for that discussion) – nonetheless has a number of good points, and one of those is in a fuller expression of the Ember days, as reflected in its Collects:

I. For those to be ordained [Ember Wednesday]

Almighty God, the giver of all good gifts, who in thy divine providence hast appointed various orders in thy Church: Give thy grace, we humbly beseech thee, to all who are [now] called to any office and ministry for thy people; and so fill them with the truth of thy doctrine and clothe them with holiness of life, that they may faithfully serve before thee, to the glory of thy great Name and for the benefit of thy holy Church; through Jesus Christ our Lord, who liveth and reigneth with thee, in the unity of the Holy Spirit, one God, now and for ever. Amen.

II. For the choice of fit persons for the ministry [Ember Friday]

O God, who didst lead thy holy apostles to ordain ministers in every place: Grant that thy Church, under the guidance of the Holy Spirit, may choose suitable persons for the ministry of Word and Sacrament, and may uphold them in their work for the extension of thy kingdom; through him who is the Shepherd and Bishop of our souls, Jesus Christ our Lord, who liveth and reigneth with thee and the Holy Spirit, one God, for ever and ever. Amen.

III. For all Christians in their vocation [Ember Saturday]

Almighty and everlasting God, by whose Spirit the whole body of thy faithful people is governed and sanctified: Receive our supplications and prayers, which we offer before thee for all members of thy holy Church, that in their vocation and ministry they may truly and devoutly serve thee; through our Lord and Savior Jesus Christ, who liveth and reigneth with thee, in the unity of the same Spirit, one God, now and for ever. Amen.

In the Ember Weeks, to be said every day, for those that are about to be admitted into Holy Orders.

ALMIGHTY God, our heavenly Father, who hast purchased to thyself an universal Church by the precious blood of thy dear Son; Mercifully look upon the same, and at this time so guide and govern the minds of thy servants the Bishops and Pastors of thy flock, that they may lay hands suddenly on no man, but faithfully and wisely make choice of fit persons, to serve in the sacred Ministry of thy Church. And to those which shall be ordained to any holy function, give thy grace and heavenly benediction; that both by their life and doctrine they may show forth thy glory, and set forward the salvation of all men; through Jesus Christ our Lord. Amen.

ALMIGHTY God, the giver of all good gifts, who of thy divine providence hast appointed divers Orders in thy Church; Give thy grace, we humbly beseech thee, to all those who are to be called to any office and administration in the same; and so replenish them with the truth of thy doctrine, and endue them with innocency of life, that they may faithfully serve before thee, to the glory of thy great Name, and the benefit of thy holy Church; through Jesus Christ our Lord. Amen.

The Ember Days are not, however (or at least have historically have not been) solely about the ministry. “Fisheaters,” a Roman Catholic blog, notes that

Four times a year, the Church sets aside three days to focus on God through His marvelous creation. These quarterly periods take place around the beginnings of the four natural seasons that “like some virgins dancing in a circle, succeed one another with the happiest harmony,” as St. John Chrysostom wrote…

These four times are each kept on a successive Wednesday, Friday, and Saturday and are known as “Ember Days,” or Quatuor Tempora, in Latin. The first of these four times comes in Winter, after the Feast of St. Lucy [December 13th]; the second comes in Spring, the week after Ash Wednesday; the third comes in Summer, after Pentecost Sunday; and the last comes in Autumn, after Holy Cross Day [September 14th]…

These times are spent fasting and partially abstaining… in penance and with the intentions of thanking God for the gifts He gives us in nature and beseeching Him for the discipline to use them in moderation. The fasts, known as ‘Jejunia quatuor temporum,’ or ‘the fast of the four seasons,’ are rooted in Old Testament practices of fasting four times a year.”

Interesting aside: the late Anglican hagiographer James Kiefer noted, in his account of the Ember Days (which, alas, I cannot locate online, or I would have linked it here), that shrimp tempura was originally created by Portuguese missionaries to Japan, as being a suitable food to eat on the Quatuor Temporum (see the connection…?), when meat was not permitted, but fish (and by extension, other seafood) was!

“in addition to the penitential fasting and alms-giving of this time, [Embertide] is good to consider our stewardship of the earth, a responsibility God gave to us in the Garden of Eden, as recorded in Genesis 1:28-30… Be mindful of your effects on our dear earth and don’t allow people to “politicize” the issue of our stewardship of God’s creation! But to be mindful of nature, it helps to actually see her first. Go outside and look! And praise God for all you see, hear, smell, feel, and taste as you allow His glorious works to touch your senses!”

In the Anglican tradition, we tend to think of the Rogation Days, (in the Spring, prior to the Feast of the Ascension) as being especially suitable for praying for and being mindful of our stewardship of this good Earth which God has given us; it’s interesting – and to me, encouraging – to think of the quarterly Ember Days as also being appropriate for such considerations!

Then we come to the Reformed tradition. Without dropping the themes of fasting and repentance, the Reformers re-envisioned the Ember days as being especially devoted to the teaching of doctrine – and particularly, of course, Reformation doctrine, as contained in the various catechisms and confessions. A Lutheran blog, “Blog My Soul,” describes the matter thus:

“we can understand Ember Days as the time set aside four times a year to focus on God through His marvelous creation: seeking God’s blessings upon the fruits of the earth and acknowledging that all food comes from Him… [However] In the Church of the Reformation, the Ember days marked a season of piety especially devoted to preaching on the Catechism…

“The Ember Days were originally days of prayer, repentance, and fasting. After the Reformation, the Ember Days themselves became for Lutherans one of the roots of the evangelical “days of repentance’… this is the basis for the suggestion to treat the Ember Days as ‘A Day of Humiliation and Prayer’ and for promoting the Ember Days as a time to give special attention to the elements and fundamentals of Christian knowledge and life found in the Catechisms.”

Anglicans are, of course, Reformed Catholics; and while there are some Anglicans who wish to take one or the other of these elements so far that (in my opinion) a crucial balance is lost, one cannot be true to the Anglican tradition without taking account of both. So it also seems fitting that the Ember Days be used to remind ourselves of the core doctrines of our Christian faith, particularly as Anglicans understand them.

Embertide would also be a good time to read the Articles of Religion , also known as “The Thirty-Nine (or XXXIX) Articles”: an important, indeed foundational, Anglican document, which many who claim to be Anglicans have never even read! While I am not among those who favor treating the Articles as a “confessional document” in the same way as Lutherans treat the Augsburg Confession or Presbyterians the Westminster Confession, they are without question one of our classical Anglican formularies, and, in effect, define the limits of doctrine for us as Anglicans. One can hardly claim to be an Anglican without at least having read them, and in some fashion taken them into account.

I do hope this rather lengthy account of the Ember Days has proven interesting and/or useful! May God bless you, this Embertide, and throughout the holy season of Lent.