“We are the religion of the Incarnation. God became man, the invisible God became visible, he sanctified the material world and elevated these visible, tangible signs to communicate invisible graces and to convey eternal truths.” 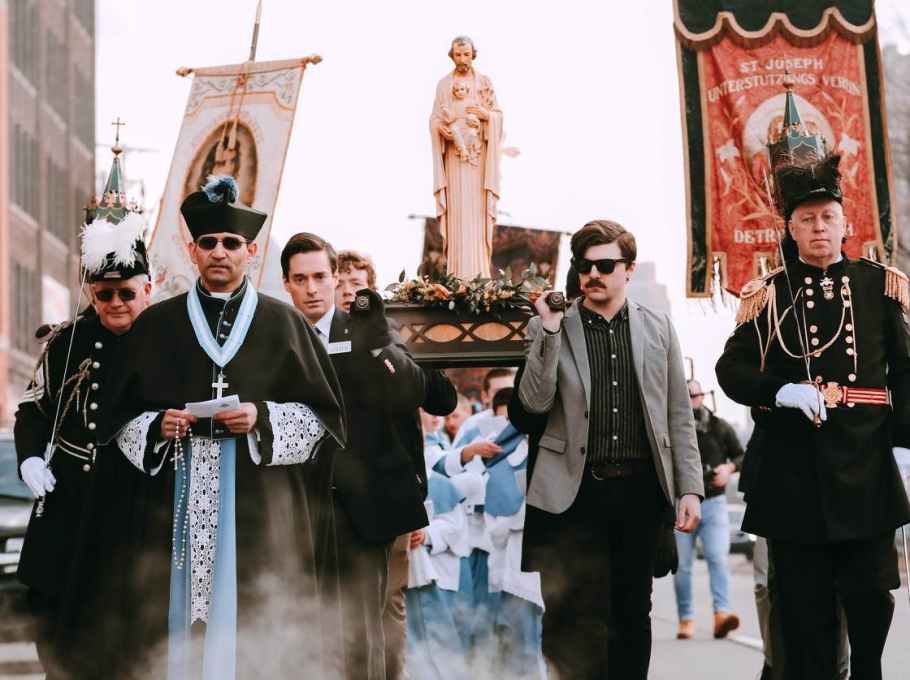 Canon Stein noted, in reference to the St. Joseph’s Procession (pictured above) in particular,

“It only takes a quick glance around the world to see a fatherless society, and to see either a slothful or workaholic society, or a lack of an appropriate understanding of manliness. It’s neither brute nor effeminate, it’s faithful, it’s steadfast, it’s courageous and gentle. And we find all those things in St. Joseph, so I think that’s another part of the power of that picture.”

All very true. But, he goes on to add,

“We are body and soul, all these spiritual truths are meant to be communicated through our senses. We get to see our faith, hear our faith, taste our faith, etc., and that just appeals to us so much,” he said.

“Truth needs to shine in beauty…we’re not angels, we’re not just pure intelligences, we need to see, touch, hear; and that’s something the traditional liturgy has always done. That’s something that a reverent Mass or procession can do, these visible signs that the Church has used throughout her history to excite devotion and promote devotion.”

One of my reasons for concern when we as Anglicans veer too far to the Protestant / Reformed side of the Christian spectrum is the accompanying tendency to get uncomfortably close to a quasi-gnostic devaluation of the physical, the material, the sensory – Creation itself – in favor of the cerebral, the theoretical, the (narrowly-defined) spiritual. “Spirit good, matter bad” is a common view in Christian circles. But, it’s a heretical one!

The reality is, ours is an Incarnational, sacramental Faith.

God created the world, and called it Good. Creation has suffered due to human sin; we have damaged it, and to a degree, effaced its goodness. But for us to think we could utterly destroy the goodness of a Creation God Himself has created and called “good” is giving ourselves far too much power. It smacks of hubris.

We have not even (despite what sometimes seems like centuries of trying) managed to totally destroy the goodness of this very earth, that God-given gift which is our home while earthly life endures. We certainly cannot claim to have destroyed the goodness of all Creation!

Furthermore, God became Man for our sakes; in the two Natures – Divine and human – which are joined indissolubly in the one Person of Christ, God has joined Himself indissolubly (in the words of St. John of Damascus) to matter: physical, sensory being (“reach out your hand, and touch my side… do not doubt, but believe”). Do we dare to deny or disparage what God in Christ has taken unto Himself?

It works the other way, too: the Western Christian tradition speaks of the Divine Logos as indwelling the created order, sustaining and upholding it; the Eastern Orthodox tradition speaks of the “uncreated energies” of God which suffuse and permeate it. Pantheism – which confuses God and matter – may indeed be “but a gilded atheism,” as one commentator has put it; but that does not mean that God cannot and does not come to us, be present for and to us, in and through created things.

Indeed, He does! As anyone who has ever been moved to wonder and gratitude toward God at the glory of a sunset, the beauty of a spring flower or autumn colors, the sound of birdsong or the sight of a waterfall, or the grandeur and magnificence of the works of a Bach or a Handel, can attest.

Creation itself can be a sacrament, in a sense: an outward and visible sign of an inward and spiritual grace. In the general sense, that grace is the gift of life itself, and of all that we need to sustain it. If food and water, air and shelter, are indeed – as they are – the gifts of a loving Creator, then they are not JUST material, not ME matter: they have a sacramental quality.

[And that is not even getting into the gifts of art and music (as alluded to above), of familial and romantic love, and of so many other things that are not so tangible as food, drink, fire, and clothing, but which nonetheless are essential for our full humanity, and a full and complete life in this world. All these, too, are the gifts of a benevolent Divine Providence, and thus have a sacral, a sacramental, character: though like anything else, that character can be effaced – though not utterly destroyed – by human sin.]

Indeed, it could be argued that Creation is itself the primary sacrament, both temporally and instrumentally, in the sense that the very Dominical sacraments – baptism by water in the Name of the Father, and the Son, and the Holy Ghost, and partaking of the Body and Blood of Christ in the bread and wine of the Eucharist – could not be accomplished without that created order (and thus, the existence of water, bread, and wine).

One can certainly argue that God could have done it a different way! Of course He could. A sovereign God can do what He wants, however He wants. But the point is, He did not. If God had wanted us to divorce our faith from the created order, to be (or act as if we were) angels or pure intelligences, as Canon Stein pointed out in the quote above, He surely would not have mandated the use of created substances – water, bread, and wine – for its highest and most holy rites!

Now, among the services the Reformed Protestant tradition offers us, in its often cerebral, intellectual, and theoretical approach to the Faith, is the reminder not to let ourselves get TOO caught up in the created order, and forget to look beyond it. It reminds us that however much we may revere the Creation – one of the ways in which God manifests Himself to us – it is Him alone that are we to worship.

Nonetheless, left to its own devices, unmodified by a more Catholic sensibility, that tradition can carry us too far in the other direction… and, I would argue, often does.

Again, ours is an Incarnational, sacramental faith.

We forget, deny, or minimize that fact, I believe, at our grave spiritual peril.