It is only occasionally that The Anglophilic Anglican writes book reviews, and to post on books I have not yet read is unprecedented. But these are three that not only pique my interest, but which I feel may turn out to be important reads. If I am right, I shall review them after I’ve read them! But for now, I’m simply sharing my interest, with the thought that they may prove of interest to my readers, too. As usual, the italicized, indented sections of text are quotes, in this case from the relevant Amazon listings:

Andrew Willard Jones: Before Church and State: A Study of Social Order in the Sacramental Kingdom of St. Louis IX (2017).

“Before Church and State: A Study of Social Order in the Sacramental Kingdom of St. Louis IX by Andrew Willard Jones explores in great detail the “problem of Church and State” in thirteenth-century France. It argues that while the spiritual and temporal powers existed, they were not parallel structures attempting to govern the same social space in a contest over sovereignty. Rather, the spiritual and the temporal powers were wrapped up together in a differentiated and sacramental world, and both included the other as aspects of their very identity. The realm was governed not by proto-absolutist institutions, but rather by networks of friends that cut across lay/clerical lines. Ultimately, the king’s “fullness of power” and the papacy’s “fullness of power” came together to govern a single social order.

“Before Church and State reconstructs this social order through a detailed examination of the documentary evidence, arguing that the order was fundamentally sacramental and that it was ultimately congruent with contemporary incarnational and trinitarian theologies and the notions of proper order that they supported. Because of this, modern categories of secular politics cannot be made to capture its essence but rather paint always a distorted portrait in modernity’s image.

In both my B.A. studies – in which I pursued a self-designed major in medieval studies, including history, literature, and philosophy – and my Masters work in early and medieval Christianity, one thing that was a given was the perennial tension, sometimes struggle, and sometimes conflict, between Church and State. It wasn’t something that was defended; it didn’t need to be. It was simply a foundational, underlying assumption.

But even then, I caught glimpses hinting that there might be more to the story; END_OF_DOCUMENT_TOKEN_TO_BE_REPLACED 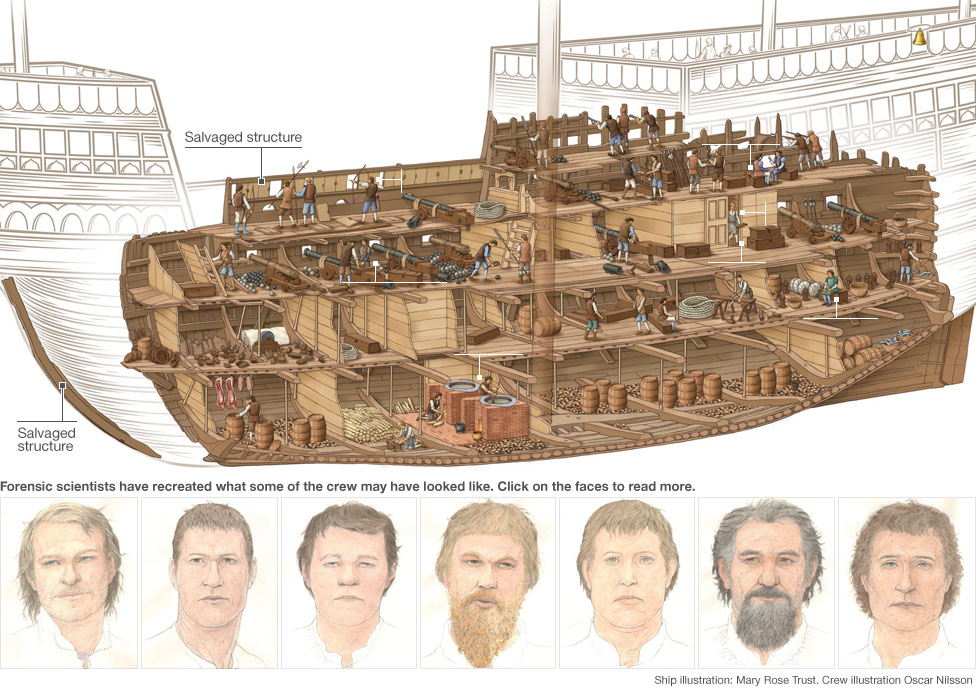 More than 30 years after it was raised from the seabed – and almost 500 years since it sank – the secrets of Henry VIII’s flagship, the Mary Rose, are being revealed to the public – along with the faces of its crew.

The Anglophilic Anglican has not been posting much that is either Anglophilic or Anglican, of late! I shall try to correct that imbalance: one should not stick one’s head in the ground, especially at a time of crisis for the Western world; but on the other hand, man cannot live by politics alone, either – at least not without going stark raving crazy!

At any rate, I would love to visit the Mary Rose Museum – dedicated to King Henry VIII’s flagship, sunk in 1545 and raised in 1982 – in Portsmouth, England, one day:

“Every artefact on show here is an original piece found with the wreck. Some of the cannons were still sticking out of the gunports when it was discovered in 1971.

“The Mary Rose was raised from the seabed of the Solent in 1982, and has been on display before, but it is only now that insights into life on board are being shown to the public.

“Forensic scientists, more used to working with murder victims, have recreated the faces of seven of the about 500 men who died when the ship sank in 1545.

“The new Mary Rose Museum has been dedicated to them, and it is through them the story of the ship is now being told.”

As I say, I would love to visit, some day! I do hope I get back to England, before I die…