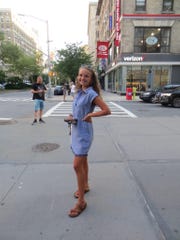 “Church should offer more open-ended resources such as meditation, discussion groups and even nature walks. Let teens come to God in their own way.” – Stacia Datskovska, Opinion contributor: USA Today

Source: Churches could win back teens like me if they were more welcoming and less judgmental | USA Today

As I read this essay, I am reminded of the introduction to C.S. Lewis’ essay, “Priestesses in the Church”:

“I should like Balls infinitely better,” said Caroline Bingley, “if they were carried on in a different manner … It would surely be much more rational if conversation instead of dancing made the order of the day.”

“Much more rational, I dare say,” replied her brother, “but it would not be near so much like a Ball.”

I am not defending the gratuitous self-righteousness of the woman with whose example this young woman opens her essay; lack of charity is never excusable.

But when Miss Datskovska jumps from the unkind words of an unpleasant person to generalize, “many Christian denominations are too deeply rooted in tradition. Whatever this ‘tradition’ comes dressed as, we find it a turnoff,” she is basically saying “I should like church much better if it were less like a church.”

And when she goes on to assert, from the lofty height of her fifteen years on this good Earth, that “the Christian church experience needs to start transcending the traditional and adapting to the times,” I confess I am challenged to refrain from getting a bit grumpy and uncharitable myself (“Hey, you kids! Get off my lawn!” … but I digress…).

(And further, to “find meaning in church beyond traditional mass” – “beyond,” that is, the Sacrament of our Lord’s Body and Blood, in which He who died for us is made present to us in the consecrated elements of bread and wine. Beyond the sacramental Presence of the Incarnate Word of God.)

If that is your desire, child, if that is the church you want, I have news for you: it already exists. It’s called the Unitarian Universalist church, and it just might be a good fit for you. You even mention it, though you err in supposing that it is a Christian denomination. It was, once; but it is no longer. But perhaps that is where you may find yourself fitting in.

For a while, anyway. Until you realize – God being gracious – that not only do you not yet have all the answers, but you don’t even have the knowledge and experience to properly shape the questions.

Or until you get tired of staring at your own reflection in the spiritual mirror. Then you might find yourself longing for something of substance, of significance, of lasting worth – something beyond yourself. Perhaps, even… tradition.

I know: I’ve been down that road. Questing, and even wandering, is not always bad; sometimes, it can lead us back home the better for the journey: strengthened, broadened, deepened. As T.S. Eliot – a staunch and in many ways, rather traditionalist Christian, as well as a poet of the first rank – famously put it,

“We shall not cease from exploration, and the end of all our exploring will be to arrive where we started and know the place for the first time.”

But I will tell you this: it would have been a tragedy if the Church had, while I was wandering in a far country (metaphorically speaking), changed to suit what I may have thought I wanted, at the time. I would have had no place left to come home to.

To return to this idealistic young lady: my suspicion, from her opening line (“When I entered the musty church hall for Easter Mass…”), that she was a “Christmas and Easter” Christian, was confirmed further down, when she comments, “I attend only biannually because of the strict standards and pompous preaching that relate to anything but true spirituality.”

Now, while I confess that I sometimes roll an eye at “C&E” Christians, it is also true that I’d far rather have them in church twice a year than not at all! Who knows how God may move their hearts, and souls, on those rare occasions?

But I do have to roll my eyes in an even more pronounced fashion when a 15-year-old (and I teach many of those, so I am familiar with the demographic) endeavors to speak with authority on what constitutes “true spirituality.”

And I note that this young woman appears to be reasonably fit. I find myself wondering if she is, perhaps, a student athlete? If so, I further wonder, is she as dismissive of the “strict standards and pompous preaching” of her coaches, as they work to condition – and exhort – her, and her fellow-athletes, to the level necessary to excel in their chosen sport, and even, perhaps, to win games?

Has it not occurred to her that something similar might be at play in spiritual conditioning? Or is discipline only acceptable if it’s in something she wants to do anyway?

Ah, I suspect that there we may have tapped the nail on the head! It appears that this young lady has imbibed deeply at the wells of self-gratification and “Do your own thing”; and callused her knees genuflecting at the altars of “If it feels good, do it,” or the even more vague and nihilistic Nike slogan, “Just do it.”

She is not alone, of course. We all, if we are being honest with ourselves, struggle with this very human urge to do what is comfortable, enjoyable, pleasant to us, rather than what is not.

But some of us may have attained sufficient perspective, perhaps maturity, and possibly even a glimmer of wisdom, to realize that even some things we may not like all that much are, nonetheless, good for us. Like exercise. Or eating our vegetables (or balanced meals in general, instead of junk food). Or getting enough sleep at night.

Or submitting to a developed tradition of faith and praxis, formed, proven, and perfected over centuries (or even millennia), the practice of which has demonstrably formed saints, alleviated suffering, and contributed to the flourescence of human accomplishment.

Perhaps rather than dismissing a tradition she freely admits she only samples twice yearly, she might try – just by way of an experiment – entering fully into it, for the course of a year? Just one year, out of a lifetime; but fully: Mass every Sunday and day of obligation, regular recitation of the liturgical Hours (Divine Office), Christian meditation (using, perhaps, lectio divina, or the Ignatian spiritual exercises), keeping the calendar of feasts and fasts, tithing regularly, and assisting at the soup kitchen, or other equivalent works of charity.

And then, from the basis of some actual, in-depth experience, she might look again at the question of whether tradition is or is not worthwhile. And if her answer is still that it’s dumber than a box of rocks, well then, more power to her. There’s still the UUs.

But at least she would have more basis for making a judgement than understandable pique at one woman’s lack of charity (I might also add that the Church has always been a school and hospital for sinners, not a club for saints; and that anyone who professes to be shocked – shocked! – that some Christians may act in hypocritical ways knows little about either Christianity or human nature), or a dismissive observation that “God’s house” seems to be “a room full of people shivering in slightly too cold pews.”

Let me give credit where it’s due: this is a well-researched, well-written piece; and Miss Datskovska is commendably erudite and expressive in her writing of it.

Nor do I think she is necessarily wrong when she suggests that some churches could do more to foster engagement with youth, in a way that shares the riches of their (our!) traditions with them: perhaps through youth retreats, choirs (not “praise bands” or choruses, but real choirs, based in the classical choral tradition), work days or camps enacting both “ora et labora” and actively helping one’s neighbor, etc.

(And I kind of like the idea of nature walks: one thing the Church has not done a very good job of articulating, historically, is our Christian responsibility to exercise good stewardship of Creation – this good Earth that God has placed in our care.)

I am not, frankly, quite sure which is more breathtaking: the ignorance or the arrogance of that attitude – though to be honest, it is a lamentably common one, these days, and among people of greater age and life experience than hers.

But perhaps you have to be young to make such a statement with quite the cavalier self-confidence – and complete lack of self-consciousness – of this young lady.

Oh, to be fifteen again!