“Raise Your Battle Flag” (partial) by Celtic Confederate. – this excerpt includes footage from flag-raisings by the Virginia Flaggers. Full version may be found here.

I have not posted much of a Confederate or Southern culture and heritage nature lately, as other issues have taken center stage for the time being. But that does not mean that I have lost my passion for the Southern Confederacy, which (as a friend of mine is wont to points out) “was wrong about slavery” – although many even among the elite recognized it as a moral as well as political evil, and most Confederate soldiers never owned a single slave – “but right about everything else!”

Here, then, by permission , is a Pledge to the Confederate Flag, by my friend John Field Pankow:

I pledge my allegiance to the flag of the Confederacy and to the ideals for which it stood and stands: liberty, honor, chivalry, independence, courage, duty, and love of God, family and home.

On my honor, I promise never to forget the just cause to which so many devoted their lives. I promise to do my best to see that their proud history is truly reported and not defamed. May my voice be strong and true as I tell the story of this flag and its people to my children and their children, and all else who will listen.

And if the time comes when the flag requires my defense, may I have the courage, the strength, and the honor to defend it, at all costs, with all that I have and all that I am.

This I pledge on my sacred word of honor.

To which I would add:

Of course, it could be argued that there is not one single “Confederate flag.” There were three National flags, just in the four years of the Confederacy, and many battle flags, not just “the” Battle Flag, as it has become known.

The First National (1861) was the “Stars and Bars” properly speaking – distinct from, but intentionally similar to, the “Betsy Ross” version of the Stars and Stripes – and that came in four variations (with 7, 9, 11, or 13 stars in the canton), depending on how many states were in the Confederacy at the time: 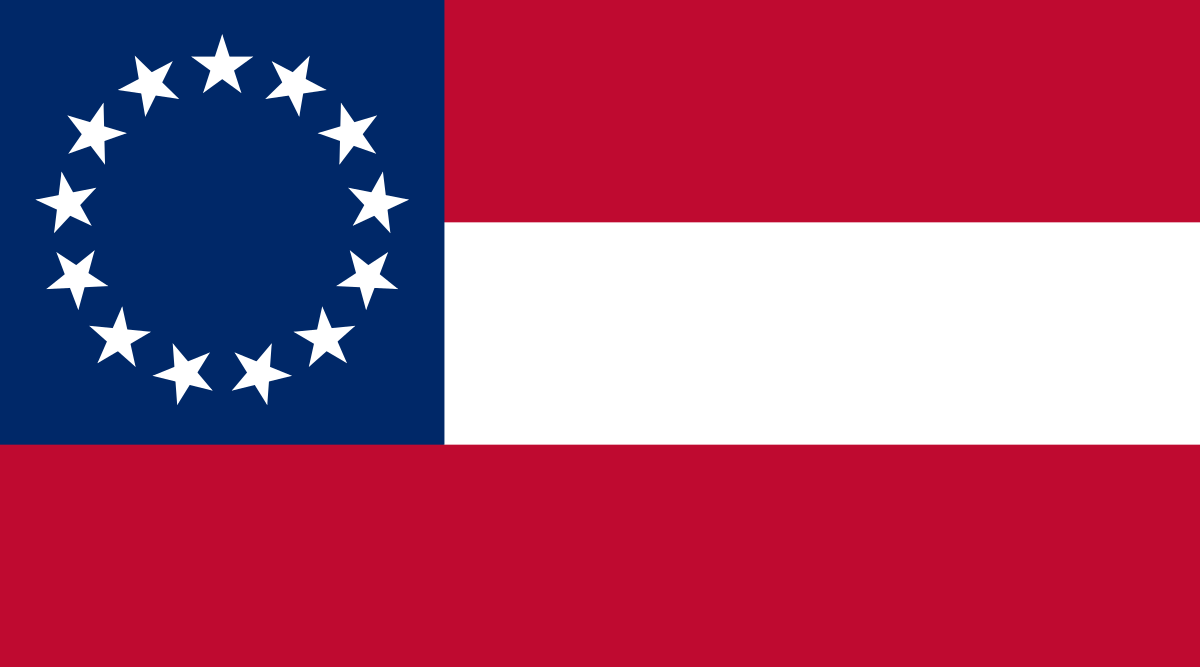 The Second National (1863), also known as the “Stainless Banner,” was the first to incorporate the “St. Andrew’s Cross” or “saltire” design as found on the Army of Northern Virginia’s Battle Flag: And the third and final design, the Third National (1865), or the “Bloodstained Banner,” added a vertical red bar, primarily to prevent the flag from being mistaken for a flag of truce when hanging from a staff with no wind:

And of course, there is the one that is best known, called “the Battle Flag,” or “the Rebel Flag”: technically the “Second Naval Jack” (1863-1865). Variations were also used by several field armies (usually square ones closer to the canton of the Second and Third National flags), most notably (as mentioned above) by General Robert E. Lee’s Army of Northern Virginia. Here is the version usually seen today:

It was this flag that has become the one most closely associated with the Confederacy in the popular imagination: loved and revered, or hated and despised, according to one’s sympathies. When people say “the” Confederate Flag, this is generally the one meant.

Needless to say, I fall into the “loved and revered” camp! And since we are still in a battle – a “cold civil war,” as some have termed it, or a “second Reconstruction,” as others have noted – it is this flag, the Battle Flag, that I think of when I read John’s Pledge. I encourage others who wish to “sign on” to the Pledge to do so in the comments. God bless, and Deo vindice (“God will vindicate us”)!