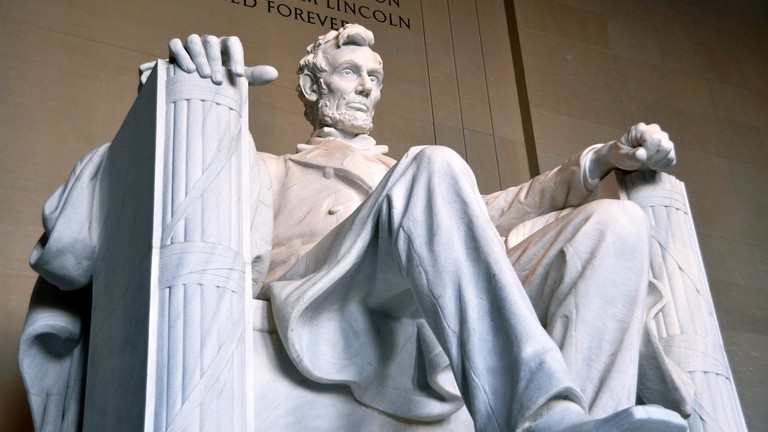 Today, the 12th of February, is the birthday of one whom some celebrate as the “savior of his country,” while others of us excoriate as a vicious tyrant who may have “saved the Union,” but who in the process trampled the Constitution and destroyed the Constitutional Republic our Founders bequeathed to us. I refer, of course, to Abraham Lincoln.

Aside from the grossly misnamed “Emancipation Proclamation,” which “emancipated” not a single slave – it applied only to the Confederacy, and areas under CSA control, in which Mr. Lincoln’s writ did not run, and specifically excluded all areas (including those slave states which had remained in the Union, and also formerly Confederate areas then under Union occupation) in which it did – Lincoln is best-known for his “Gettysburg Address,” in which he claims, inter alia, that

“Fourscore and seven years ago, our Fathers brought forth on this continent a new Nation.”

In point of fact, of course, eighty-seven years prior to his 1863 Address, our Founding Fathers declared, in the Declaration of Independence, that “these United Colonies are, and by right ought to be, free and independent States.” Plural. That is something rather different. But of course Lincoln, frontier lawyer that he was, was never one to let truth get in the way of a good line!

He also piously proclaimed that this new Nation (first an alliance, then a Confederacy, and only later a Federal Union: now, arguably, not even so much as that) was “dedicated to the proposition that all men are created equal.” True, as far as it goes. But as one commentator has noted, it is interesting – and significant – that he did not follow that thought to its conclusion, in the Declaration, which includes these words:

“Governments are instituted among Men, deriving their just powers from the consent of the governed — That whenever any Form of Government becomes destructive of those ends, it is the Right of the People to alter or abolish it and institute a new Government.”

The reason he did not point this out is obvious; but that he made the reference at all is indicative of the fact that he expected that, even then, not to many of his hearers would be familiar enough with our founding documents to make the connection. He was undoubtedly right, as his words – and not the full quote from the Declaration – have been slavishly repeated, ad nauseam, down through the 150+ years since he made that Address. And given the state of education, currently, there are even fewer now who would make it.

Thus me pointing it out!

He also made, in this Address, the outrageous claim that the War Between the States – the War of Northern Aggression, erroneously called by him (and again, echoed since) the “Civil War” (1) – was fought “that government of the people, by the people, for the people, shall not perish from the earth.” Nothing could have been further from the truth. As H.L. Mencken was later to accurately point out,

“The Gettysburg speech is at once the shortest and the most famous oration in American history. Put beside it, all the whoopings of the Websters, Sumners and Everetts seem gaudy and silly. It is eloquence brought to a pellucid and almost child-like perfection—the highest emotion reduced to one graceful and irresistible gesture. Nothing else precisely like it is to be found in the whole range of oratory. Lincoln himself never even remotely approached it. It is genuinely stupendous.

But let us not forget that it is oratory, not logic; beauty, not sense. Think of the argument in it.  Put it into the cold words of everyday. The doctrine is simply this: that the Union soldiers who died at Gettysburg sacrificed their lives to the cause of self-determination — ‘that government of the people, by the people, for the people,’ should not perish from the earth. It is difficult to imagine anything more untrue. The Union soldiers in that battle actually fought against self-determination; it was the Confederates who fought for the right of their people to govern themselves.

“What was the practical effect of the battle of Gettysburg? What else than the destruction of the old sovereignty of the States, i.e., of the people of the States? The Confederates went into battle free; they came out with their freedom subject to the supervision and veto of the rest of the country — and for nearly twenty years that veto was so effective that they enjoyed scarcely more liberty, in the political sense, than so many convicts in the penitentiary.”

As the commentator noted above (whose whole essay is well worth a read) points out, “The states that left the Union to join the Confederacy did so in the true sense of the Jeffersonian principle of self-government, as stated in the Declaration. Lincoln’s invasion of the Confederate States stood that idea on its head.” And of course, “Representative democracy would have continued in the Union and in the Confederacy regardless of the outcome” of the War.

Far from preserving liberty, equality, or representative government, the precedent set – of control and domination over the States by the central, Federal government in Washington, D.C. – by that terrible War, which killed half a million Americans entirely without need (2), continues to echo down through the ages, to our detriment.

This is what you are celebrating, if you choose to celebrate Lincoln’s birthday.

Please – think about it.

1)  A civil war is one fought between two or more factions for control of the central government. The Confederacy had no desire to run the Union! It merely wished to withdraw from it, and to enjoy the freedom to work out its own destiny in peace.

2)  The ending of slavery was emphatically, and by Lincoln’s own admission, not the aim of the War, and even if it had been, is it logical that the U.S., alone among the nations of the world, needed a horrific and destructive war to end an institution all the others ended peacefully?