The largest ever Bronze Age hoard to be discovered in London, the third largest of its kind in the UK, has been unearthed in Havering.

Source: The largest ever Bronze Age hoard in London has been discovered – HeritageDaily – Archaeology News

“A total of 453 bronze objects dating between c.900 and c.800 BC have been uncovered during a planned archaeological investigation, with weapons and tools including axe heads, spearheads, fragments of swords, daggers and knives found alongside some other unusual objects, which are rarely found in the UK.”

Fascinating! Unfortunately, not much (if anything) is said about the “unusual objects, which are rarely found in the UK.” Hope more information is revealed, as the project continues!

Archaeologists discover that Must Farm Bronze Age settlement, dubbed the Pompeii of Britain, was burned to the ground soon after it was built.

The site – a farming settlement built on piles in a wetland (fen), most likely for defensive purposes – continues to yield tremendous insights into the material culture of the period. This, despite the shortness of its habitation: apparently only about a year passed between its completion, and its destruction by fire. Of course, that very fact makes it a valuable snapshot of a particular moment in British prehistory!

“The press release for the article in Antiquity states that the fire was ‘A tragedy for the inhabitants, but lucky for archaeologists, as the fluvial silts have preserved wooden artefacts, pottery sets, bronze tools and weapons, fabrics and fibres , querns, loom weights, spindle whorls, animal remains, plants and seeds, coprolites…'”

It appears that between 50 and 80 people may have lived at the settlement – suggestive of a small tribe, or perhaps a large extended family (such distinctions can be blurry, at best). “Tools, housing, and even vitrified food have all been impeccably preserved at the waterlogged site.” Lead archaeologist of the Cambridge Archaeological Unit, Mark Knight, comments,

“Working at the site was a series of daily, almost hourly moments of astonishment and wonder (with each new discovery seemingly outshining the last). This was invariably accompanied by a faint rotten-egg smell that goes with most waterlogged sites – the smell of gradual organic decay.”

Enough to make me wish I had stuck with archaeology! Although the chances of being able to work on this site would have been slight, even if I had. Alas! For more, check out these links: 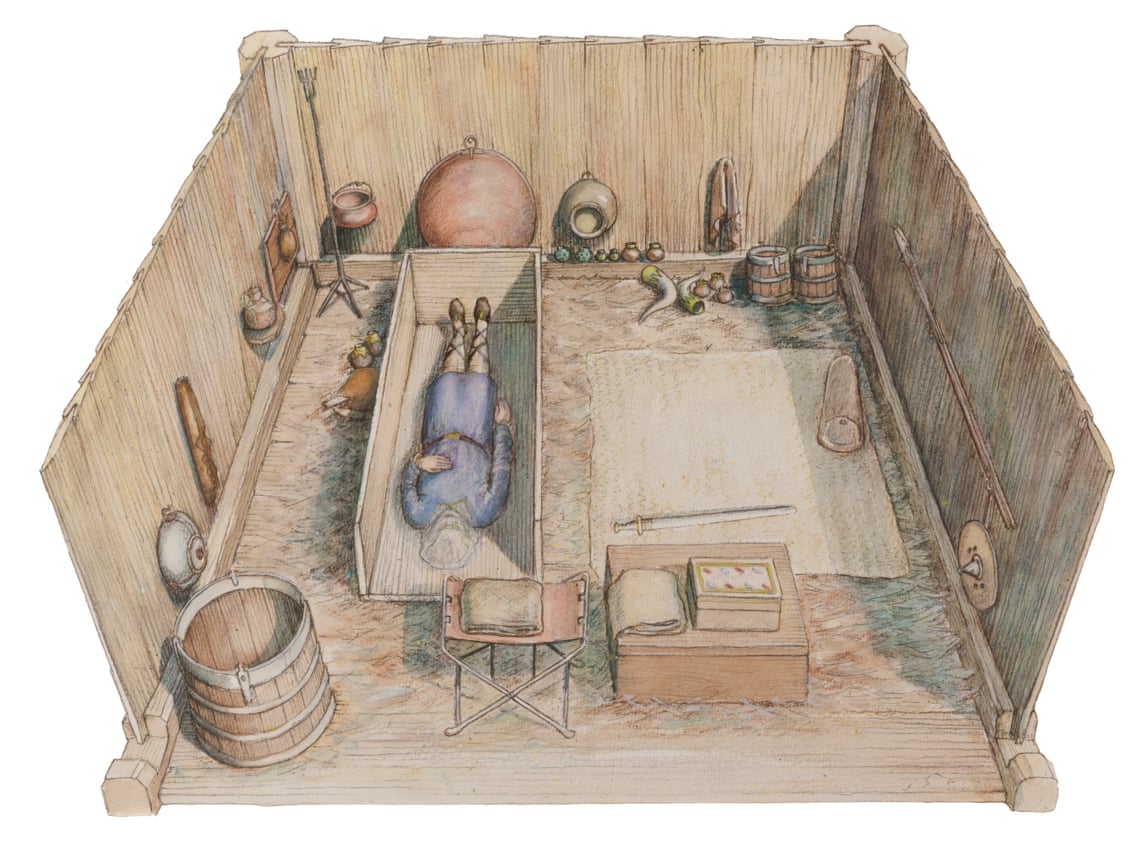 The title is a little click-bait-ish; the article itself points out only that “it could be seen as a British equivalent to Tutankhamun’s tomb, although different in a number of ways.” Nonetheless, a fascinating find!

As the article also comments, the site was discovered in 2003, as the result of a proposal to widen a road, but “it is only now, after years of painstaking investigation by more than 40 specialists, that a fuller picture of the extraordinary nature of the find is emerging.”

Of greatest interest to me, as The Anglophilic Anglican:

“… scientific dating now suggests the burial was in the late-6th century, about 580… Gold foil crosses were found in the grave which indicate he was a Christian, a fact which has also surprised historians.

“Sue Hirst, Mola’s Anglo-Saxon burial expert, said that date was remarkably early for the adoption of Christianity in England, coming before Augustine’s mission to convert the country from paganism.

But it could be explained because Seaxa’s mother Ricula was sister to king Ethelbert of Kent who was married to a Frankish Christian princess called Bertha. ‘Ricula would have brought close knowledge of Christianity from her sister-in-law.'”

However it arrived (and the connection to Kent is significant, as it was King Ethelbert who gave refuge to Augustine, later “of Canterbury,” when he arrived), this is interesting – to my mind, fascinating! – evidence that Christianity had at least a toe-hold in Anglo-Saxon England earlier than most had previously thought.

Things like this are why my understanding of the “Anglican Tradition” encompasses much more than simply Cranmer, Hooker, and the Caroline Divines. Without question, they were crucial to the formation of Anglicanism as we understand it today. But the roots of the Ecclesia Anglicana are found here – and in similar sites, both previously and yet-to-be discovered – and even earlier, among the Celts (both Brythonic and Goidelic) that preceded the Anglo-Saxons.

There is so much more to the Anglican tradition than just the 16th and 17th centuries!

New scientific discoveries are set to dramatically transform our understanding of prehistoric Britain.

So, once again pop culture is discovering what some of us have realized for some time: that so-called “primitive” peoples were not as primitive as we often tend to believe!

A study of Stonehenge-era archaeological material from large-scale ceremonial feasts is revealing that neolithic Britain was, in key respects, much more interconnected and unified than previously thought.

“These gatherings could be seen as the first united cultural events of our island, with people from all corners of Britain descending on the areas around Stonehenge to feast on food that had been specially reared and transported from their homes” [said lead author Dr Madgwick].

The emergence of some sort of country-wide identity now appears to have been part of a package of new cultural and political developments that occurred at around the time the great stone circles of Stonehenge and Avebury were built.

What is not known is whether this nascent “national,” or at least pan-tribal, cultural identity was a lasting feature of neolithic British society, or whether it only lasted as long as the reign of a particularly dominant king / chieftain (or perhaps dynasty). The evidence, in any case,

“strongly suggests that religious or political elites wanted and were able to gather together at a ‘national’ rather than purely local communal or tribal level.

“Given the religious and ritual nature of the venues, it is conceivable that at least some of the participants had societal roles that were ‘national’ in nature  – similar perhaps to the pan-tribal Druid religious elite in Iron Age Britain 2,000 years later.

“The emergence of some sort of country-wide identity now appears to have been part of a package of new cultural and political developments that occurred at around the time the great stone circles of Stonehenge and Avebury were built.”

Read on for more! 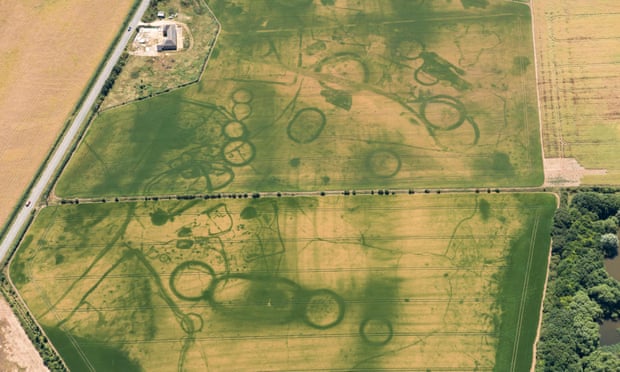 “A scorching heat wave that has left much of the English countryside dusty and brown has also uncovered parts of the country’s past that have been buried for millennia.

“Archaeologists have been flying over the parched landscape this summer looking for patterns in the fields. As the soil dried out , ‘mysterious Neolithic ceremonial monuments, Iron Age settlements, square barrows and a Roman farm’ have become visible, Historic England said in a news release this week.”

Follow the link for more information, and/or see this Guardian article. 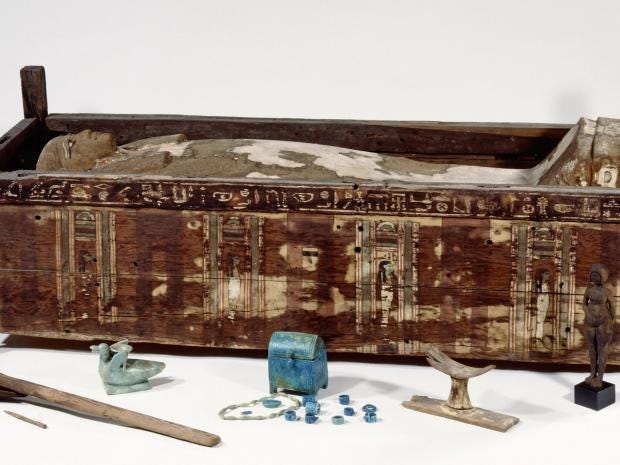 Scientists who managed to obtain full genome sequences of Ancient Egyptians for the first time have concluded the people of the pharaohs were more closely related to modern Europeans and inhabitants of the Near East rather than present-day Egyptians.

The researchers, writing in the journal Nature Communications, admitted their sample “may not be representative for all of ancient Egypt.” Nevertheless, they concluded the mummified people were “distinct from modern Egyptians, and closer towards Near Eastern and European samples”.

“When comparing this pattern with modern Egyptians, we find that the ancient Egyptians are more closely related to all modern and ancient European populations that we tested, likely due to the additional African component in the modern population.”

Some of us would not find this particularly surprising. I don’t! But the dissenter they found for this article, this Professor Stephen Quirke, “an Egyptologist at University College London,” is “quirky” all right. Regarding his comment that “When we are discussing it, we have to be much more sensitive to how these kinds of statements are read outside where we are at the moment,” it’s not hard to read between the lines: a less careful and euphemistic way of stating that would be along the lines of, “we have to be careful not to offend those people who have bought into the Afro-centric narrative.”

In other words, preserving a Leftist narrative that privileges sub-Saharan Africans over people of European and Middle Eastern ancestry with respect to the high culture of Egypt – and the “multiculturalist” (read: anti-Western) agenda that entails – is the most important consideration, even if the science clearly demonstrates that that’s a load of bull-puckey. Once again, it’s ironic how the Left trumpets “science” when they think they can use it to discredit traditionalist ideas, but abandon it in a hurry when it supports traditional understandings, rather than their revisionist agenda!

At any rate, it seems fairly clear that the primary survivors of the “original” ancient Egyptians are the Copts, who survive as an often-persecuted minority of Christians in modern Egypt, having been converted by the missionary work of St. Mark the Apostle. It should not be forgotten that Egypt was host to a thriving Christian civilization – centered on Alexandria, one of the five ancient Patriarchates and a major center of Christian learning and devotion – prior to Egypt’s violent subjugation by Islam.

And it was with that shift that the genetic composition of Egyptians, which as this article points out had remained “genetically relatively unaffected by foreign conquest and rule” prior to the Islamic invasion, shifted as well.

For many people, the time changed back from Daylight Saving to Standard Time overnight last night. And we think we’ve got it rough, trying to remember to set our clocks back…!

Nota Bene: It has been pointed out that this meme must originally have been created in the Spring, as last night was time to “Fall back” an hour…