Europe saw a coming-of-age moment for the eurosceptic far-right movement in the European elections results 2019.

Four days of voting for national representatives to the European Parliament ended Sunday with major gains by nationalist / populist parties (“far right” = eurosceptic, opposed to globalism, mass migration, and other aspects of the Left-wing agenda).

Meanwhile, in Britain, former UKIP leader Nigel Farage’s weeks-old Brexit party won 28 seats, against 16 for the Liberal Democrats. Traditional powerhouse Labour took only 10, and the once-mighty Conservative Party, known as the Tories, four. Even the Greens beat the Tories, with seven!

Although the linked article notes that “Despite making gains, the vote was hardly the watershed anticipated by Europe’s far-right populists” [see above…] “who have vowed to dilute the European Union from within in favour of national sovereignty,” it was a very definite wake-up call – indeed, a hard slap in the face – to traditional “centrist” parties.

An interesting point is that the other major gainers were Leftist parties, including the Greens; clearly, much of Europe’s population is tired of “business as usual.” With the sloppy center on record as refusing to make alliance with the nationalist / populists, it will be fascinating – to say the least – to see where European politics goes from here!

The people of the West are stirring in their slumber.

In response to a recent “Manifesto” by “30 Pro-Europe Intellectuals” (informally sub-titled in many media reports, “Europe is coming apart before our eyes”), John Waters writes,

“These intellectuals sarcastically dismiss Europeans’ current craving to ‘reconnect with their national souls.’ ‘Abstractions such as ‘soul’ and ‘identity’ often exist only in the imagination of demagogues,’ they declare.”

Must be nice to be able to so blithely dismiss the highest aspirations of not only Europeans, but humans, over centuries and millennia as “abstractions” that “only exist in the imagination”! But indeed, these so-called, self -defined “intellectuals” do seem lacking in both soul and identity, so it’s no wonder they find these things irrelevant or dangerous. In Waters’ words,

“The failure of the E.U. project is causally related to Europe’s retreat from its rich Christian heritage. That retreat has left a vacuum that economics, liberalism, and materialism have failed to fill. A bogus liberalism has attacked and all but destroyed the three fundamental pillars of human society in Europe: family, Church, and nation. Yet all three are capable of resurgence at any moment. Early signs of such resurgence are what scared the E.U. intellectuals into print.”

The irony is that these “intellectuals” think they are avant-garde, cutting edge. In reality, it is they – not those they mock and decry – who are the dinosaurs, lurching toward extinction. Europe – the ordinary people of Europe, replete with both soul and identity – is on the verge of a major Awakening; indeed, it has already begun. As Waters points out,

“A revolution is happening across the free world. It is not a revolution of the ‘Right,’ ‘alt-right,’ or ‘far right,’ but a revolution from the concrete center, from the places where working people live and work to build, fix, paint, and clean the world as their antecedents did for thousands of years. It is fundamentally a reaction against lies, intimidation, official stupidity, and political correctness.

“It is already sweeping Italy, Spain, Germany, France, Sweden, and the countries of the Eastern bloc. It is at the back of Brexit and Donald Trump. It may not be an ‘intellectual’ movement, but it is a movement rooted in a deep and ancient intelligence — the intelligence of the human heart — which has beat for several thousand years at the center of the greatest civilization the world has ever seen.

“The people of the West are stirring in their slumber. Yes, Europe is coming apart at the seams, but not in the ways the E.U. intellectuals divine. What they call ‘the bonfire of our freedoms’ has already happened” – indeed, they and their ilk were the ones doing the burning – “and the people who make and fix things are building a new Europe in the ashes of the old.”

Viva Europa! May the new Awakening grow, burgeon, and flourish across that great continent and among its people, and beyond!

“This is Britain, we are not Europeans. We have never been Europeans. This is our land and we are taking it back. If the political class doesn’t like it then they are going to see a revolution like they’ve never seen before.”

The Express (UK) reports that “Seething Brexiteers have taken to the streets of London on Friday to demand Theresa May ditch her proposed Brexit divorce deal, warning refusing to do so could result in Britons ‘revolting’ to see their demands met,” and in the video on the linked site, interviews a “disgruntled Brexiteer” who states emphatically,

“Time to take up the spirit of Oliver Cromwell, it’s time to stand up, time to rise up, time to regain what’s rightfully ours. We ain’t going anywhere, the yellow vest is just the start. This is going to spread out to the whole country. We don’t want a deal, don’t want a deal. No deal Brexit…”

Now, I am no fan of Oliver Cromwell! But if his memory can inspire Britons to stand up against and overthrow, not the Monarchy, but those in the government who are attempting to sacrifice Britain on the altar of Leftist collectivism, globalism, and authoritarianism, then maybe that memory will have accomplished something worthwhile than the man ever did, to set against the havoc and destruction he wrought in the 17th century.

Europe is struggling, but Europe is also beginning to awaken from its long sleep, or at least, lethargy. This is still more evidence of that awakening. Will it awaken enough, and soon enough?

It’s like watching the Titanic churn toward that iceberg, but you can both see and sense the turning of the rudder and the backing of the screws beginning to bite. Will they turn the bow fast enough, far enough, to prevent a fatal collision? These are tense times, to put it mildly!

“Marine Le Pen, president of the right-of-center National Rally (the former National Front party, and today the main opposition party in France), said, ‘There is a tiny caste that works for itself and there is the vast majority of French people who are abandoned by the government, and feel downgraded, dispossessed.’ 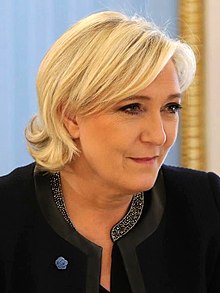 “The ‘yellow jackets’ [named for the yellow safety vests worn by the protesters] now have the support of 84% of the French population. They are demanding Macron’s resignation and an immediate change of government. Those who speak on radio and television say that Macron and the government are hopelessly blind and deaf.

“At the moment, the ‘yellow jackets’ have decided to organize a third national protest – today, Saturday, December 1st – with another march to Paris and the Elysée Palace. The revolt in the country is intensifying and shows no sign of slowing down.”

As Dr. Guy Millière, professor at the University of Paris and the author of this piece, points out,

“The ‘populist’ wave is now hitting France; it could well mean the end of Macron’s term as president.”

Finally, some good news out of France!

“Marine Le Pen’s National Rally has overtaken the centrist party of Emmanuel Macron, the French president, for the first time, according to an opinion poll released Sunday, in a further sign of the rise of the far-Right in Europe. The Ifop poll measured voting intentions for European Parliament elections next May, seen as a decisive battle between pro-EU liberals and Eurosceptic populists that could be pivotal in shaping the future of the European Union after Brexit.”

Remember, of course, that to the “mainstream” (Left-wing) media, anyone who is not hard-Left is “far right,” and love for one’s own people and nation is tantamount to Nazism…

Granted, the lead is not dramatic; but it is significant:

“Together with the seven per cent of people planning to vote for a smaller far-Right party, Stand Up France, and two per cent going for two small “Frexit” parties, the French far-Right has won 30 per cent of voting intentions, a five-point gain since August, according to the poll…

“Populist parties’ gains have increased fears in Brussels that anti-immigrant Eurosceptic parties may wield greater clout after the May elections.”

We can only hope.

Terror threats, rising violent crime and the European Union’s suffocating strictures on guns have many Europeans craving their own version of America’s Second Amendment.

For decades, European have been quick to disparage the United States for our robust Constitutional protection of the right to keep and bear arms, as enshrined in the Second Amendment.

Shielded, whether they knew it or not, by geographical features which (until recently) have served as de facto barriers to easy migration, and even more by despotic but mostly stable governments in places like Iraq, Libya, and Syria, and secure in almost completely homogeneous and law-abiding societies, they mocked us for our “love affair” with guns, and derided our supposed “frontier mentality” on the subject.

But now, in light of the deluge of Third-World immigrants that was unleashed upon Europe in 2015 and continues to this day, some, at least, are mocking no longer. Rather, they are wishing (and I have heard this same thing from European friends on Facebook) that they had more Constitutional guarantees of freedom, and especially a 2nd Amendment!

The linked article is on the longer side, but worth reading in full; here are a few excerpts:

“In 12 days I visited Germany, Belgium, Luxembourg, France, Monaco, Italy, the Vatican, San Marino, Switzerland, Liechtenstein and Austria. Everywhere I went, I interviewed people about the state of things in Europe, and I was truly shocked by one thing in particular — the number of people who told me they envy America for its Second Amendment.

“I’m not making that up. Ask yourself this question: How much do you know about the details of the founding documents of any country in Europe? If you are like me, it’s not much. So that makes it even more remarkable that many people in Europe are familiar with one very important detail about the U.S. Constitution—our Second Amendment freedom to keep and bear arms.

“Even more surprising was the number of people who expressed a wish that they, too, could be given the right to defend themselves and their families. And in several European countries, gun-rights measures are being actively addressed…”
END_OF_DOCUMENT_TOKEN_TO_BE_REPLACED