The years when these boxwood sent their roots into the Virginia soil were the years the American republic took root on these shores.

“George Mason, like Thomas Jefferson and George Washington, was happiest at home, either in the fields and woods, with a good book by the hearth, or entertaining neighbors and family. Living close to the soil, time was measured by the rhythms of nature. The flow of the seasons brought different activities: planting and harvesting, fishing and hunting, visiting neighbors in winter, and strolling through the gardens in summer. There was time for church, social gatherings, dances and parties, especially during the Christmas season. All took place in the community and around the home… Traditions ran deep, with kith and kin close by and entertainments mostly homemade.”

This would be my ideal life! I cannot conceive of a better. True, today we have advances like indoor plumbing, air conditioning (!), and advanced medicine (although the way it is organized, distributed, and administered has plenty of room for improvement); but was it really necessary to give up graciousness, in exchange for these benefits? I wonder, I truly do…

“… for George Mason, home was Gunston Hall in Fairfax County, Virginia. … Mason and many of his contemporaries loved to experiment with plants and took pride in their gardens. Gunston Hall was noted for the beautiful English boxwood that lined the walk from the house to a beautiful view of the Potomac River…

“Visitors such as Washington, Jefferson, and other patriots, neighbors and family, walked down the garden paths, and guided by the boxwood, took in the vista of the distant Potomac River, the artery of trade in this region. As children played, talk of domestic concerns and the nature of American rights and liberties was heard on these grounds…

“Now the boxwood have fallen on hard times and the decision has been made to dig them up. Experts believe that at 230 years old, the plants may be at the end of their natural life. The boxwood was planted amidst such hope, as the Colonies won their independence, and went about the process of protecting their hard won liberties. Perhaps the boxwood just does not understand how a country with so much promise could go so far astray. Nor would George Mason.”

This is barely to scratch the surface of this excellent essay, which uses the boxwood of Gunston Hall as the backdrop for a tale of the rise and fall of the America our Founders intended: – ’tis a mere appetizer, to entice one to the feast. Read, mark, learn, and inwardly digest! But this I will say, if the above is not sufficient enticement: might the imminent demise of Gunston Hall’s boxwood, beautiful as they have been for more than two centuries, be an emblem of the demise of other things, just as old – but things of much deeper import…? Again, I wonder!

Today we purchase most of our food from a supermarket; our pharmaceuticals and cleansers are largely synthetic. Many of us tend purely ornamental flower borders. We are far removed from medieval times when gardens were essential for survival, and plants grown for food, medicine and enjoyment were often one and the same.

Two of my greatest loves are the Middle Ages and gardening – herbal and vegetable gardening, in particular. Indeed, one of the reasons I love herbalism so much is that it combines my love of nature and the outdoors with my love of history!

Humans have had gardens for at least as long as we have been a largely settled people; that is to say, probably pretty much since the neolithic period. But a remarkable number of our gardening and agricultural practices – I am speaking of traditional ones, mind you, not industrial agriculture! – may be traced back to the medieval period, and particularly to monastic farms and gardens.

These include double-digging and marling, crop rotation (e.g., letting fields lie fallow for a time), and the use of “manure” (as used in earlier ages, a mixture of animal dung with other types of what we would now call compostable materials).

Many of us may be familiar with Ellis Peters’ superb “Chronicles of Brother Cadfael” serious of medieval crime fiction, in which the lead character, Brother Cadfael himself, was Benedictine monk-herbalist (and former Crusader) in 12th century Shrewsbury. His primary occupation in the monastery was growing herbs and keeping an herbal apothecary, from which he assisted both brothers of the Abbey of St. Peter and St. Paul and also local townsfolk with their various ills and injuries, but in the usual manner of literary detectives, crimes and mysteries in need of solutions kept finding him! 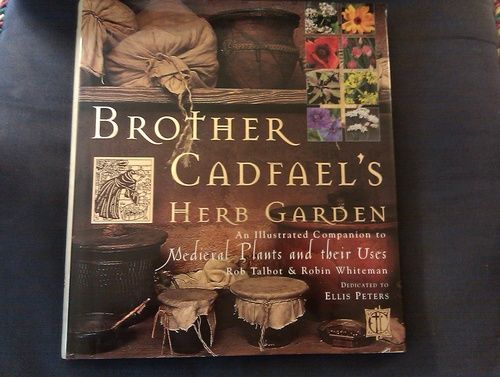 The Brother Cadfael chronicles are works of fiction, of course; but Edith Pargeter (whose pen name was Ellis Peters) was an academically-trained medievalist, and her research was solid. Medieval monks really were avid gardeners and farmers; they had to be, to support their foundations.

The Rule of St. Benedict required that monks support themselves by their own labours – ora et labora (prayer and work) was a major axiom of the Benedictine Rule. And of course, in an agrarian society like the Middle Ages, that largely meant farming, although of course monks also did many other things, in addition (manuscript-making, running hospitals and guest-houses, bread-baking, and beer-brewing, to name just a few). Notably, all of these (including manuscript-making, as medieval manuscripts were scriven on vellum or parchment, made from specially-prepared animal skins) were also closely linked with gardening and/or farming.

At any rate, for a variety of reasons – whether a love of history, especially medieval history, a desire to recapture and practice traditional arts and crafts, or as a hedge against a possible crisis which would require greater self-sufficiency, among others – some of us might want to consider recreating a medieval garden, or elements thereof, as our circumstances allow.

The above-linked article by Gwen Bruno provides an excellent general history of the medieval garden, and thus inspiration for the endeavor. For additional inspiration, as well as helpful hints and suggestions on how to do it, and a variety of useful resources and instructions on historical gardening in general, I recommend Designing a Medieval Garden, on the Wyrtig blog. If your goal is primarily medicinal, you might also want to consult English Heritage‘s “What to Grow in a Medieval Garden,” which lists nine of the most commonly-grown medieval medicinal herbs.