There seems to be what I see as the beginning of a substantial backlash against many things we have taken for granted in culture and society for the last five or six decades in the Western world, and particularly in America. One of these is the notion that motherhood and homemaking is an inferior, subordinate role that oppresses and demeans women, and that women should therefore eschew it, and join men in the workplace. The rise of the “TradWife” (traditional wife) movement is part of the kickback against this – and one with which, in large measure, I agree.

I was raised by a traditional wife and mother: Ma never worked outside the home during my lifetime, although she did work as an English teacher during the first few years of her marriage to Pa. But not long after my oldest brother was born, she left “outside” work, and returned to the home. And there is no question that I benefited – we all did – from her ability to devote her full time and attention to being a wife, mother, and homemaker. We had clean clothes, a clean house, healthy, delicious homemade meals, baked deserts, and much else, thanks to her not needing to squeeze such things around full-time (or even part-time) work.

I also have no doubt that I was saved from many opportunities to “sin and err” by the fact that I knew she (or if she had to be away, my grandmother) would be there waiting for me when I got home from school! And no matter how far I roamed, through the woods and fields near my house, I never seemed to be out of the range of her call (a resounding “Tooommmmmmmmmm!”), that echoed through the air, come supper time – to the awed amazement of my friends, who were shocked that such a small person (she was all of 5’3″ in height) could call so loudly.

I empathize with the nostalgia for the immediate post-WW II era. Although I was born in 1965, I was in many significant ways a “child of the 1950s”: Ma and Pa were married then, and both my brothers were born in the ’50s (I was a late-comer, and rather a surprise, at the time!). So I get it! My concern about the TradWife movement, however – despite my admiration for many of the women involved, and my agreement with the basic premise that both women and their families are benefited by them being at home with and for those families – is that many or most of them seem to take the 1950s as their template for what a “traditional” wife should be, and do.
END_OF_DOCUMENT_TOKEN_TO_BE_REPLACED 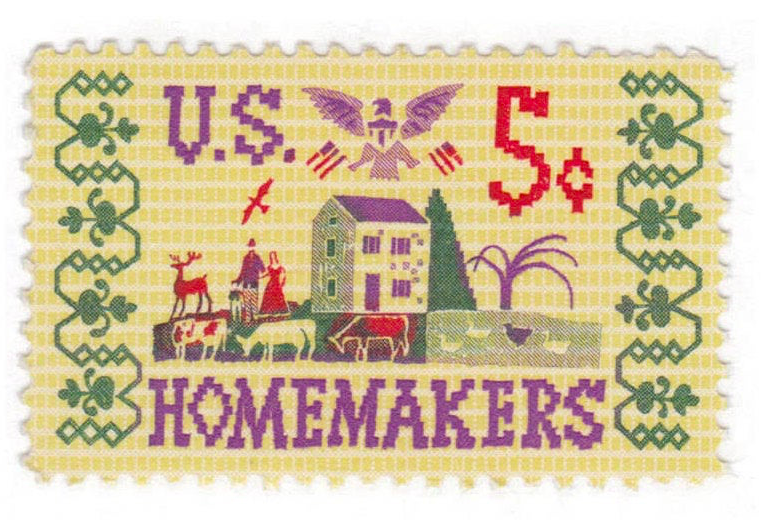 So many women aspire to satisfying other men’s ambitions/corporations with their best talents and energy and then return home spent with little TLC left for husbands and children. I appreciate women who choose the very noble profession of stay at home mom. They truly make a difference in this world.

And yes, I know not every woman has that option. My heart grieves for those who would like to choose this most noble profession, but for a variety of valid reasons (often, in today’s world, economic), cannot. I have a massive amount of respect for those women who do what needs to be done – even if that means working multiple jobs – to support their children / families.

But for each of them, there is at least another one – and very likely more than one – who could stay at home and be a full-time wife, mother, and homemaker, but chooses not to… perhaps for valid reasons, but just as likely because she has bought into what Chesterton referred to as “a muddled idea that women are free when they serve their employers but slaves when they help their husbands.”

I grieve for them, too, but in a very different way.

One more quote on this subject, this one by Chelsea Brauwn:

“Being a wife & mother may be the hardest job I’ve ever had but it is definitely the most rewarding job in the world.

“Mothers have the most important role in the world. We are responsible for raising our future! We are their encouragement, supporters, nurturers and the ones they should be able to go to when everyone else fails them. Their success is our success & their failures are our failures.

“Raising our own children and being a mother shouldn’t seem like a burden, it is the greatest privilege anyone could be given. We get to watch all of our hard work grow into happy, successful people with the capability to accomplish all of their dreams, with the morals and values that we set.

“Behind every Pastor, Doctor, Lawyer and President is a mother who refused to give up on them. No one else can replace, fill or substitute the duty of a mother & I refuse to let anyone else do my job.”

The secret to enjoying life, then, is to see it as something to be enjoyed—at times even endured—with others, ideally with family. Home makes all the difference.

A lot of my posts lately have been (unavoidably, I fear) somewhat negative. But no matter how stark and depressing things may appear, one cannot live constantly on edge. Not and retain one’s sanity! Here is a post that is both intrinsically more positive, and which also provides hints for practicing the self-care that is essential to being effective in opposing those things that we believe are unhealthful for our society. Domesticity is, in many ways, the root of our strength – second only to faith in God!

“The Norwegian secret to enjoying a long winter is to see the freezing months as something to be enjoyed, not something to be endured. According to a seeker of human happiness, this makes all the difference. They even have a word, koselig, which means a sense of coziness. People gather around the table for a good meal, light candles, sip hot cocoa, and snuggle under fuzzy blankets. The Dutch call it gezelligheid, the experience of belonging, spending time with loved ones, a general sense of well-being and togetherness. The Danish word is hygge. Sitting by the crackling fire with your family on a cold night, reading to your son as he cuddles in your lap, Christmas gatherings … you get the idea. Although it’s usually translated as ‘coziness,’ it’s much more than that. It’s an attitude toward life, a way of being. And real coziness is not possible apart from a love and respect for homemaking…

“You can’t buy community, and you can’t fake it, either. An absent father can’t randomly gather his family around the fireplace and expect everyone suddenly to be cozy. Real koselig takes more than warm bodies in close proximity and sheepskin slippers. Like anything worth doing, authentic coziness takes work: prior investment in relationships, domestic chores, food-prep, caring—in a word, housekeeping. But it’s worth it. In the doldrums of a dark winter, family nights, social gatherings, and dinner parties are a reminder that we’re all in this together.

“I want to suggest that koselig reminds us of what we live for—friends, to be sure, but primarily the home. It reminds us that homelessness is a tragedy. And home reminds us of the priority of the family. We’re not just “social creatures.” Society does not conceive us, and nurse us, and love us. We’re not like baby sharks, either. We don’t just swim away from our mothers after we’re born. We are family creatures, and we were made for more than homelessness. Like koselig, you can’t buy a family, and running a home takes work. But it’s worth it. The secret to enjoying life, then, is to see it as something to be enjoyed—at times even endured—with others, ideally with family. Home makes all the difference.”

Please read the entire article. There is much of wisdom and encouragement to be found therein!

This came across my newsfeed today, to the usual mix of ironic laughter and disparaging comments. I’ve seen it a number of times, and it is invariably greeted by either outrage or guffaws.

But the thing that is lost in both reactions is the fact that most men would treat a woman who was this kind to her husband as an absolute jewel to be cherished, cared for, and loved with passionate devotion. The few who would not, are jerks who would continue to be jerks no matter what the woman did.

(Of course, the sad economic reality, now, is that this sort of a situation is often simply not possible in today’s world – in which both partners must usually work outside the home in order to financially support the household – even if both parties wanted it. But that is a whole ‘nother kettle of fish………)